Utah State University geology graduate students Meagan DeRaps, Jonathan Harvey and Michelle Summa were recently awarded student research grants by the Geological Society of America in addition to other awards. The students, all USU Water Fellows, are among a select group of scholars across the nation chosen in several competitions designed to foster students’ research endeavors in geological science.
DeRaps is investigating basaltic magmatism in the western Snake River Plain near Mountain Home, Idaho.
“Volcanic activity in the eastern Snake River Plain has been attributed to the track of the Yellowstone Hotspot, which occurred due to the movement of the North American plate over hot mantle material,” says DeRaps, who studies with faculty advisor John Shervais. “Volcanism in the western Snake River Plain, however, is not as well understood.”
By studying the geochemistry of basalts from this region she hopes to get a better understanding of the timing and origin of the area’s volcanism as well as identifying any relationship to the Yellowstone Hotspot.
In addition to her GSA grant, DeRaps received a $500 J. Stewart Williams Endowed Graduate Fellowship from the USU Geology Department toward her research. The fellowship was established in memory of Williams, who served as the department’s first head and as the first dean of the School of Graduate Studies.
Harvey is studying the stratigraphy of flood deposits in Buckskin Gulch, a slot canyon on the Utah-Arizona border. The gulch, a tributary of the Paria River, is the longest and deepest slot canyon in the American Southwest.
“I will use this stratigraphy to determine the role of floods in cutting arroyos throughout the Colorado Plateau,” says Harvey, who conducts research with faculty mentor Joel Pederson.
Along with his GSA student grant, Harvey received the 2008 Howard Award from the society’s Quaternary Geology and Geomorphology division. The award includes a $2,500 research grant and is given, according to the GSA Web site, for “the best master’s student research proposal in geomorphology.”
Harvey also received an Honorable Mention from the National Science Foundation Graduate Research Fellowship Program for his proposal.
Summa is conducting a fluvial geomorphology project on Kanab Creek, a major tributary of the Colorado River on the north rim of Grand Canyon.
“The goal of my research is to understand the alluvial history of Kanab Creek through sedimentology and stratigraphy, geologic mapping and optically stimulated luminescence dating of river deposits,” says Summa, who studies with faculty advisor Tammy Rittenour.
Summa is testing the hypothesis that periods of river aggradation and incision correlate with dry and wet climate conditions.
In addition to her GSA grant, Summa received $7,500 from ExxonMobil’s 2008 Geoscience Grant program toward her research.
Related links:
Contact: Jean Daddow, 435-797-1273, geology@usu.edu
Writer: Mary-Ann Muffoletto, 435-797-3517, maryann.muffoletto@usu.edu 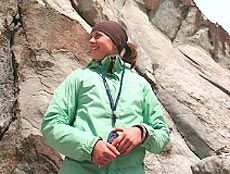 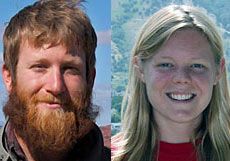