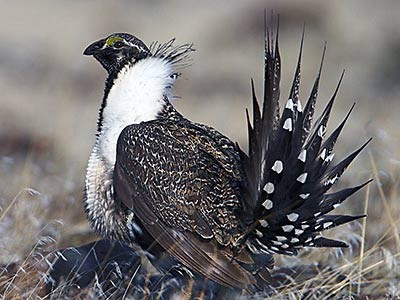 The U.S. Interior Dept. said Greater Sage-grouse will not be listed under the ESA and praised 'epic' efforts by Western states to promote science-based conservation. USU has led community-based conservation in Utah. Courtesy USFWS.

Utah State University Extension-led efforts over more than two decades are among an unprecedented, landscape-scale conservation campaign that’s headed off threats to an iconic rangeland bird, along with dreaded restrictions to state recreation, agriculture and energy development.

U.S. Interior Secretary Sally Jewell made the announcement the U.S. Fish and Wildlife Service decided not to list Greater sage-grouse under the Endangered Species Act via a video released Sept. 22, 2015, on Twitter.

Jewell called the decision historic, praised Western states’ “epic collaboration” in protecting the species and says their efforts set the groundwork for a 21st century, science-based approach to conservation.

Ahead of the USFWS decision, Utah Gov. Gary Herbert lauded USU’s leadership in statewide conservation efforts and signed an executive order in February directing state agencies to protect and preserve the ground-nesting bird and its habitat. In July, the Western Extension Directors’ Association lauded Utah’s Community-Based Conservation Program, a collaboration formed more than 20 years ago with leadership from USU Extension.

Terry Messmer, CBCP director, Quinney Professor for Wildlife Conflict Management in USU’s Department of Wildland Resources and USU Extension wildlife specialist, says Utah has been a visible leader throughout the multi-state campaign and sage grouse research conducted at USU and BYU, along with stalwart commitment from local working groups, made the difference.

“Our research started in 1996 with a $3,000 check given to me by rancher Andy Taft of Piute County’s Parker Mountain Grazing Association,” he says. “We have more than 40 public and private funding partners now, but that initial level of commitment and passion has sustained and defined our efforts throughout these years.”

“Her leadership and support have been pivotal,” he says.

“Terry and his colleagues have worked extensively to implement conservation plans on both private and public lands,” Luecke says. “It is especially gratifying to see these efforts pay off in terms of preservation of the birds, the welfare of rural communities and the restoration of sagebrush ecosystems.”

Wildland Resources Department Head Mike Kuhns says Messmer’s painstaking outreach at the community-level with thousands of stakeholders throughout the state and beyond led to CBCP’s success.

“Terry’s focus on local working groups, consisting of landowners working with agency experts and researchers, helped to improve sage grouse management and ensure a bright future for the species,” Kuhns says. “These groups would have struggled on their own. Terry saw that and made bringing these varied interests together his focus, which was a wise decision.”

Messmer says today’s announcement is a victory, but the work isn’t over.

“The real marathon starts today,” he says. “Can we sustain it?” 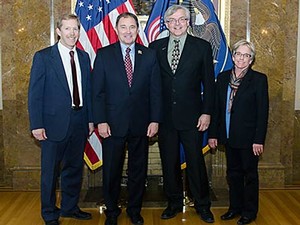 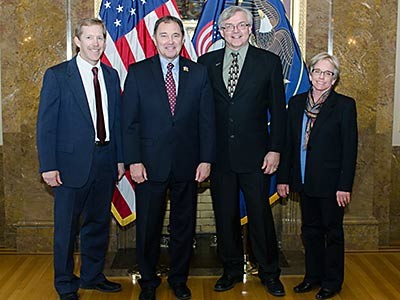