“Being part of this team places Utah State among the best basic energy science research programs in the nation,” says Lance Seefeldt, professor in USU’s Department of Chemistry and Biochemistry and USU’s investigator on the project. “Being part of an ERFC opens the door to once-in-a-lifetime research opportunities for our students.”

Seefeldt says BETCy’s proposal, among more than 200 submitted, was compelling for several reasons.

“For one, our group includes some of the nation’s most respected researchers in basic energy science,” he says. “That includes small molecules research aimed at tapping energy from such renewable sources as hydrogen, carbon dioxide, waste products and nitrogen.”

Seefeldt, an American Association for the Advancement of Science Fellow, says his team is making progress in harnessing the chemistry needed to convert sunlight into usable energy.

“Crossing that chasm — using electrons from sunlight’s phototrophic microbes to unlock energy from renewable sources — has been like crossing the Grand Canyon,” he says. “But we’re bridging that gap.”

Seefeldt, recipient of USU’s 2012 D. Wynne Thorne Career Research Award, has pioneered efforts to solve a long-standing mystery of how bacterial enzymes known as nitrogenases convert nitrogen into life-sustaining compounds on which all plants and animals depend. He and his colleagues’ discoveries could have energy-saving implications for the world’s food supply and fuel production.

In addition to his nitrogenase work, Seefeldt conducts biofuels research, including investigation of the feasibility of using algae as a fuel source. He and his students recently supplied algal biodiesel developed in Seefeldt’s lab that powered a USU-built dragster to a land-speed record.

The 2014 DOE awards, totaling more than $100 million, are the second round of funding for the EFRC program, which was established about five years ago by the department’s Office of Science. To date, EFRCs have produced 5,400 peer-reviewed scientific publications and hundreds of patent applications.

“The purpose of EFRC program is to seed large projects aimed at pulling researchers together to solve fundamental energy problems,” Seefeldt says. “This is the pinnacle of U.S. energy research and we get to be a part of it.” 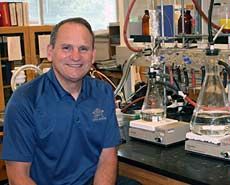 USU biochemistry professor Lance Seefeldt, an AAAS Fellow, is the university's investigator on a multi-institution Energy Frontier Research Center project that received a $10 million grant from the U.S. Department of Energy. 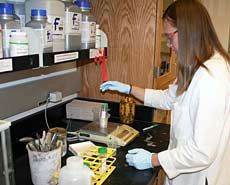