Utah State University researchers have long studied the garter snake Thamnophis sirtalis that has evolved with an amazing resistance to a powerful neurotoxin found in the innocuous-looking newt, Taricha — a favorite food of the snake.
Now they’ve found that two other species of garter snake have also developed resistance to the toxin — in a variety of ways.
Findings by USU alum Chris Feldman, now a research scientist at the University of Nevada, Reno; USU biology professor Edmund Brodie, Jr.; Brodie’s son, Edmund Brodie III of the University of Virginia, and Mike Pfrender, USU associate professor of biology, appear in the July 27 issue of Proceedings of the National Academy of Sciences. Their research is funded by the National Science Foundation.
“This is an exciting discovery because it shows us how organisms adapt to challenges in the environment,” Pfrender says. “In fact, it demonstrates that different species take different routes to deal with the same challenge.”
“The three species are achieving the same adaptation but doing it differently at the molecular level,” Brodie, Jr., says. “Observing this adaptation in one species was exciting but now we’ve taken it to a whole new level.”
The team’s research builds on 2005 findings documented by former USU doctoral student Shana Geffeney, now a postdoctoral scholar at the Stanford University School of Medicine, who identified muscle sodium channels in Thamnophis sirtalis that developed a resistance to tetrodoxin or TTX, a neurotoxin 500 times deadlier than cyanide. The toxin causes rapid death in unprotected organisms — including humans.
“These findings really inform us of the underlying mechanisms of how adaptation occurs,” Pfrender says. “This allows us to explore such questions as ‘How do organisms deal with challenges in their environment?’ and ‘How quickly can organisms evolve to adapt to these challenges.’”
Pfrender and Brodie note that environments change rapidly. Their research findings may provide clues to how humans and other species adapt to pollution and climate change, how insects develop resistance to powerful pesticides and how agricultural plants adapt to less water.
“This study shows us that novel mutations at the molecular level allow multiple evolutionary routes for an organism to solve the puzzle of environmental challenges,” Pfrender says.
Feldman, who was named USU’s 2006 Robins Award “Graduate Research Assistant of the Year,” presented the research at the 2009 Joint Meeting of Ichthyologists and Herpetologists July 22-27 in Portland, Ore. He spoke during the Society for the Study of Amphibians and Reptiles symposium honoring the 91st birthday of Robert M. Storm, who served as Brodie, Jr.’s major professor at Oregon State University.
Related links:
Contact: Edmund “Butch” Brodie, Jr., 435-797-2489, Brodie@biology.usu.edu
Contact: Mike Pfrender, 435-797-7623, pfrender@biology.usu.edu
Contact: Chris Feldman, 775-784-4053, ophis@cabnr.unr.edu
Writer: Mary-Ann Muffoletto, 435-797-3517, maryann.muffoletto@usu.edu 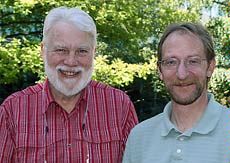 Edmund "Butch" Brodie, Jr., left, and Mike Pfrender, along with colleagues Chris Feldman and Edmund Brodie, III, published new findings in the July 27 issue of 'Proceedings of the National Academy of Sciences.' 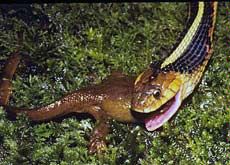 A garter snake feasts on a newt. USU biologists have long studied how the snakes have developed a resistance to the newts' powerful neurotoxin. Courtesy Edmund Brodie, Jr.