Utah State University professor Michael Wolfe was pleased and humbled by the announcement that he had been selected for the Utah Chapter of The Wildlife Society’s 2008 Award of Excellence. But even more gratifying, he says, was stepping to the podium and looking out into an audience including many of his former students.
“Students I’ve taught and conducted research with are now in positions managing the state’s wildlife populations,” says Wolfe, who joined the faculty of USU’s College of Natural Resources in 1970. “To me, that’s more important than research itself.”
Wolfe received the award, which recognized him for “38 years of dedication, research and contributions in the field of wildlife sciences,” during the organization’s annual meeting held Jan. 30-Feb. 1 in Springdale, Utah.
Wolfe says he’s a proponent of the North American Model of Wildlife Conservation, so named by noted Canadian wildlife biologist Valerius Geist in the 1980s. The model follows the notion that wildlife is a public and sustainable resource that should be scientifically managed by professionals.
“This model embraces the idea that everyone should have equal access to wildlands, yet regulations are in place to protect animal and plant habitats,” Wolfe says. “The challenge is to maintain a balance among interests – both human and wildlife.”
Wolfe’s research focuses on ungulates – hoofed mammals – and their predators. His efforts have taken him throughout North America and overseas, where he’s studied animal populations in western Europe, Russia and other republics of the former Soviet Union, Australia, Chile and Argentina. From 2000-2002, he served as mammals program coordinator for the Utah Division of Wildlife Resources.
Wolfe’s studies of Utah’s cougars – one of a population in the Monroe Mountains near Richfield and another in the Oquirrh Mountains – include the longest continuously running comparative study of mountain lions in the world.
“This puts us in a unique position of looking at how these animals are impacted by urban development,” he says. “Our studies give us an opportunity to observe cougars at the suburban-wildland interface.”
One of the largest challenges facing the next generation of wildlife managers, says Wolfe, is managing areas where human and animal habitats increasingly overlap.
“We’ve encroached so much on deer habitat,” he says. “Wildlife managers have dealt with animals issues for years. More and more they’ll be dealing with human-animal conflicts.”
Wolfe offered his insights about the human-wildlife interface in an opinion-editorial article that was published in The Salt Lake Tribune June 23, 2007. He wrote the piece following Utah’s first human fatality from a black bear attack on June 17, and the article also appears in the Spring 2008 issue of the USU-led Berryman Institute’s Human-Wildlife Conflicts journal.
“On balance, Utah is a progressive state in terms of its approach to wildlife management,” Wolfe says. “We need continued research to meet the challenges of wildlife management. Where resources are managed is where the rubber meets the road.”
Related links:
Contact: Michael L. Wolfe [mlwolfe@cc.usu.edu], 435-797-2533
Writer: Mary-Ann Muffoletto [maryann.muffoletto@usu.edu], 435-797-1429 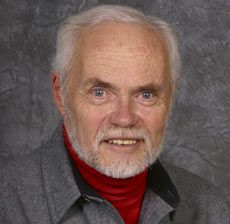 Wildland Resources professor Mike Wolfe received the 2008 Award of Excellence from the Utah Chapter of The Wildlife Society.