Utah State University received the “Leadership in Fleet Efficiency” award during the Energy Champion Awards sponsored by the Utah Saving Energy Initiative. The awards ceremony was held in the State Office Building May 27. Lt. Gov. Herbert presented the award, which recognized USU’s efforts in using natural gas to fuel Aggie shuttles.
USU has led the way in the use of natural gas in the state fleet. In FY 2008, USU accounted for half of the natural gas usage in the state, with nearly 29,000 gasoline gallon equivalent. This effort has helped reduce CO2 emissions by 110 metric tons, which equates to 20 vehicles off the road.
“We are honored to be recognized for our efforts in CGN transportation” said Alden Erickson, Aggie shuttle supervisor. “We have become the leaders in this area and are excited to be acknowledged for it by the state."

The parking and transportation team at USU is busy working on other CNG initiatives. In the future, the shuttle fleet will be updated to be more efficient and will be expanded into a charter system, helping to take even more cars off of the road.

Aggie shuttles run on natural gas. In FY 2008, USU accounted for half the natural gas used in the state, with nearly 29,000 gasoline gallon equivalent. The effort reduced CO2 emissions by 110 metric tons, which equates to 20 vehicles off the road. 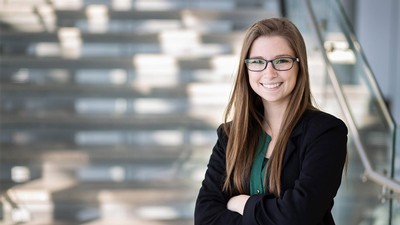