Utah State University held the 49th annual Bill E. Robbins Awards Saturday, April 22.
The featured award of the evening, the Bill E. Robins Memorial Award, went to Cody Bingham. The award is presented to the student who excels academically, displays outstanding leadership ability and shows dedication to Utah State. Bingham served as this year’s associated students of Utah state university agriculture senator, and took on many unexpected duties as a result of the USU van accident in the fall of 2005 that killed eight students and one instructor.
“I sat in awe of his ability to speak on behalf of the students of Utah State University,” said Tiffany Evans, director of student involvement. “In dealing with the media, planning a vigil and preparing his comments for the evening, he demonstrated wisdom beyond his years.”
In addition, Bingham served as ASUSU’s senator pro tempore. In this responsibility, he assisted with the re-organization of ASUSU helping define and clarify the role of the Academic Senate.
This year’s event marked the introduction of a new award, the Legacy of Utah State Award. Robbie Peterson, a survivor of the van accident, introduced the award that was created in memory of the individuals involved in the van accident last fall. The Legacy of Utah State Award will be given each year to a student who embodies the true spirit, heart and soul of Utah State and demonstrates love and support for the university family. Families of students involved in the accident participated in the Robbins evening, including the Huggins, McEntire, Fuhriman and Peterson families.
“This award will recognize a student who shows commitment to their institution and their program of study,” said Peterson, “The student must also demonstrate internal involvement and service, department dedication, perseverance during times of adversity and contribution behind the scenes.”
Juan Franco, vice president of student services, was this year’s recipient of the Gerald R. Sherratt Award. This award is given each year to a member of the university’s administration or staff who demonstrates superior leadership skills as well as an unsurpassed dedication of service to students.
Franco is a member of many boards and helped establish many student-based organizations, including Gear-Up and service learning.
“Although his involvement to the community is astounding, it is his devotion to the students that is remarkable,” said Gary Chambers, associate vice president for student services. “Dr. Franco has a true open door policy, and students are grateful for the advice he has given over the years.”
The Utah State Brigham City Student Government took home the Val R. Christensen Service Award. The award was established in honor of former Vice President for Student Services Val R. Christensen’s life-long commitment to volunteer work. It is presented to a student or organization whose volunteer service has had a significant impact on Utah State and the community.
The Achievement of the Year Award went to Autism Support Services: Education, Research and Training. This award goes to an individual or organization whose achievement has brought recognition to the university on a state, national or international level.
The Organization of the Year Award is presented to the organization that has shown dedication, excellence and service to Utah State and the community. This year’s recipient was the Utah State University Ambassadors.
Glen De Guzman was selected as this year’s Scholar of the Year. This award is given to a student who has demonstrated outstanding skill and knowledge in a particular field. The recipient has also made a singular contribution in research and has shown a determination to succeed.
Trever Ball and Zuzana Cernianska were named this year’s Male and Female Athletes of the Year.
The Graduate Teaching Assistant of the Year was awarded to Jenna Glover from the Psychology Department, and the Graduate Research Assistant of the Year was awarded to Chris Feldman from the Biology Department.
Lynne Slade was selected as Professional Advisor of the Year, and Susan Dudash from the College of Humanities, Arts and Social Sciences was selected as Faculty Advisor of the Year.
The award for Talent of the Year was presented to Jamilyn Manning White from the Department of Music.
Leigh Monhardt from the College of Education was chosen as Professor of the Year and Jay Price and Kiersten Hewitt were chosen as Man of the Year and Woman of the Year.
The Robins Awards are named in memory of Utah State student-body president William E. Robins. Robins, who held office in 1949, was killed with his wife in a 1954 plane crash. 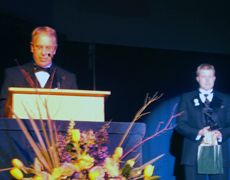 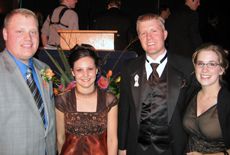 Robbie Peterson announced the creation of a new award, the Legacy of Utah State Award. Peterson is seen here with his date for the evening, Barbie Madsen, and Cody and Liz Bingham. 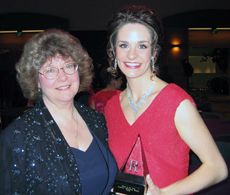 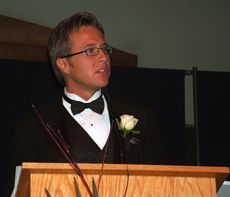 USU and Sigma Nu alum and television reporter Reed Cowan was the host for the evening.