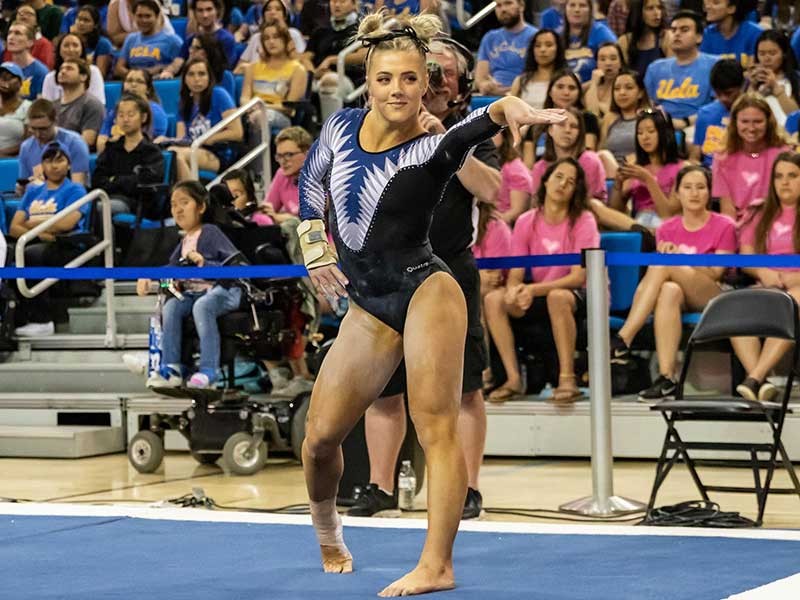 An All-American will be representing Utah State next weekend at the NCAA Regional Gymnastics Championships.

Regular season All-Americans are determined by an individual regional qualifying score in each event. Gymnasts ranked one through eight on each event earn first-team All-American honors, and individuals ranked nine through 16 garner second-team honors.

"It is an honor for me to be where I am now," Ward-Sessions said. "This year has been my best year yet, and to be an All-American has been one of my goals since I was in high school. It has been an honor to represent my family, community and Utah State throughout my time here as a gymnast."

Ward-Sessions is the first gymnast in Utah State history to ever garner All-American accolades during the regular season. Furthermore, she is the first Aggie to be named an All-American since Jodi Mabb in 1981.

"What a remarkable feat to achieve for this program, being the first-ever regular season All-American, and the first time in nearly 40 years that Utah State has seen an All-American associated with gymnastics," said second-year USU head coach Amy Smith. "Madi is incredible and has had a very deserving and storied year. I am so happy to have had the opportunity to coach her and watch her grow along the way. I am so proud and excited for her to achieve another historical accomplishment during her time at Utah State."

Ward-Sessions has had a remarkable senior season for the Aggies. Not only was she tabbed the Mountain Rim Gymnastics Conference co-Floor Specialist of the Year, but she earned first-team all-league honors on floor, and second-team accolades on vault and in the all-around.

The native of Rexburg, Idaho, has a team-leading 16 individual titles this season, which rank fourth all-time in school history for a senior. Ward-Sessions has racked up 38 career titles, which is tied for fifth all-time in program history. Her seven floor titles on the year are tied for fourth all-time at Utah State.

Ward-Sessions set a career-high mark on floor with a 9.975 against Southern Utah on March 8, which is tied for first all-time in school and MRGC history. She has scored a 9.900 or better in eight of the Aggies' 11 meets this season, including a 9.925 or better in six consecutive meets.

Ward-Sessions has five 9.925s on floor this season and seven in her career, which is a school record.

Entering next weekend's NCAA Regional Championships in Corvallis, Ore., Ward-Sessions is tied for 16th in the nation on floor with a 9.925 RQS. Her average of 9.905 on the event currently ranks first all-time in school history.