When a team of WebAIM specialists at Utah State University’s Center for Persons with Disabilities asked screen reader users what they liked, they would have been happy with 100 responses. They received 1,100 completed, multiple-choice surveys, plus several hundred pages of open-ended comments that will keep the team busy analyzing for a long time.
While the results were overwhelming, they also represent a milestone in the effort to develop Web sites that are accessible to people with disabilities. Not only is it easily the largest survey sample on the subject that the specialists have ever seen, but it also answers questions that used to nag at them.
The survey grew out of the WebAIM project, an initiative of the Center for Persons with Disabilities and Utah State University. WebAIM helps Web designers make the Internet kinder to people with disabilities. Its specialists regularly offer training sessions on making Web sites accessible.
Some of this training focuses on making Web content compatible with screen reader technology, which reads content out loud. A screen reader makes computer use possible for people who cannot read print, but its effectiveness can be hampered by an inaccessible Web design. In addition, screen reader users have their own preferences on how accessible content is presented.
As the WebAIM trainers offered information about screen reader users’ habits, the gaps in available data made it hard for them to make confident recommendations.
“We realized no one really knew what screen reader users preferred,” said training and Web site Evaluation Specialist Jonathan Whiting.
As a result a survey was sent out, appealing especially to users with disabilities. The distinction is important because some screen users are technology evaluators who can use a computer without assistive technology.
When the results came in, nearly 90 percent of the respondents used screen readers because of a disability. Of those, the overwhelming majority were people with visual impairment.
The survey results come with some disclaimers. Their sample was not controlled and some questions may have been too technical for some screen reader users to understand.
But the results solidified several things the team has thought all along, said Jared Smith, WebAIM’s associate director. Others made them question assumptions they have held over time. One example centered on alternative text, or descriptions of photos that an accessible Web site provides to a screen reader. Users with disabilities wanted photos identified as photos, while those without disabilities preferred a brief description of the photo: “the White House,” rather than “photo of the White House.”
The survey’s authors were also surprised to see how many screen reader users (75 percent) used headings to navigate a Web page. This tendency has strong implications for Web designers, because a heading that looks like a heading but is not coded as one would be skipped by a large number of screen reader users.
Finally, a large number of respondents said pdf files and flash technology were difficult to use, a problem that Smith said rests not so much with the technology as with the failure of Web developers to make it accessible. While the survey identified some trends, needs and preferences vary.
“There is no typical screen reader user,” said Aaron Andersen, a WebAIM software engineer.
While the survey provided a lot more data than its authors expected, it left them with more questions. They plan to put out other surveys on a variety of topics. For a more comprehensive look at the results of the current survey, visit the results Web site.
Writer: JoLynne Lyon, 435-797-1977, jlyon@cpd2.usu.edu
Contact: Cyndi Rowland, WebAIM executive director, 435-797-3381, cyndi@cpd2.usu.edu 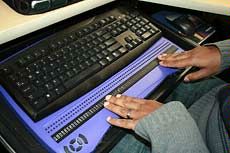