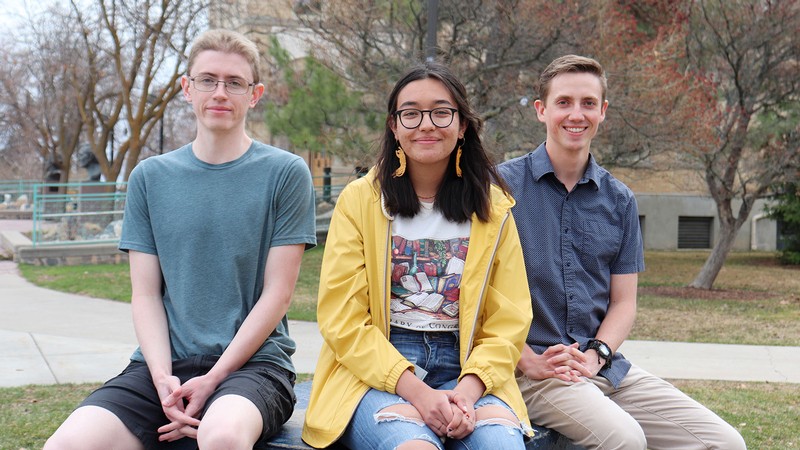 From left, USU students Bruce Brewer, Cristina Chirvasa and Wesley Mills are 2022 Goldwater Scholars. The honor is among the nation's top recognitions for undergraduate STEM scholars. 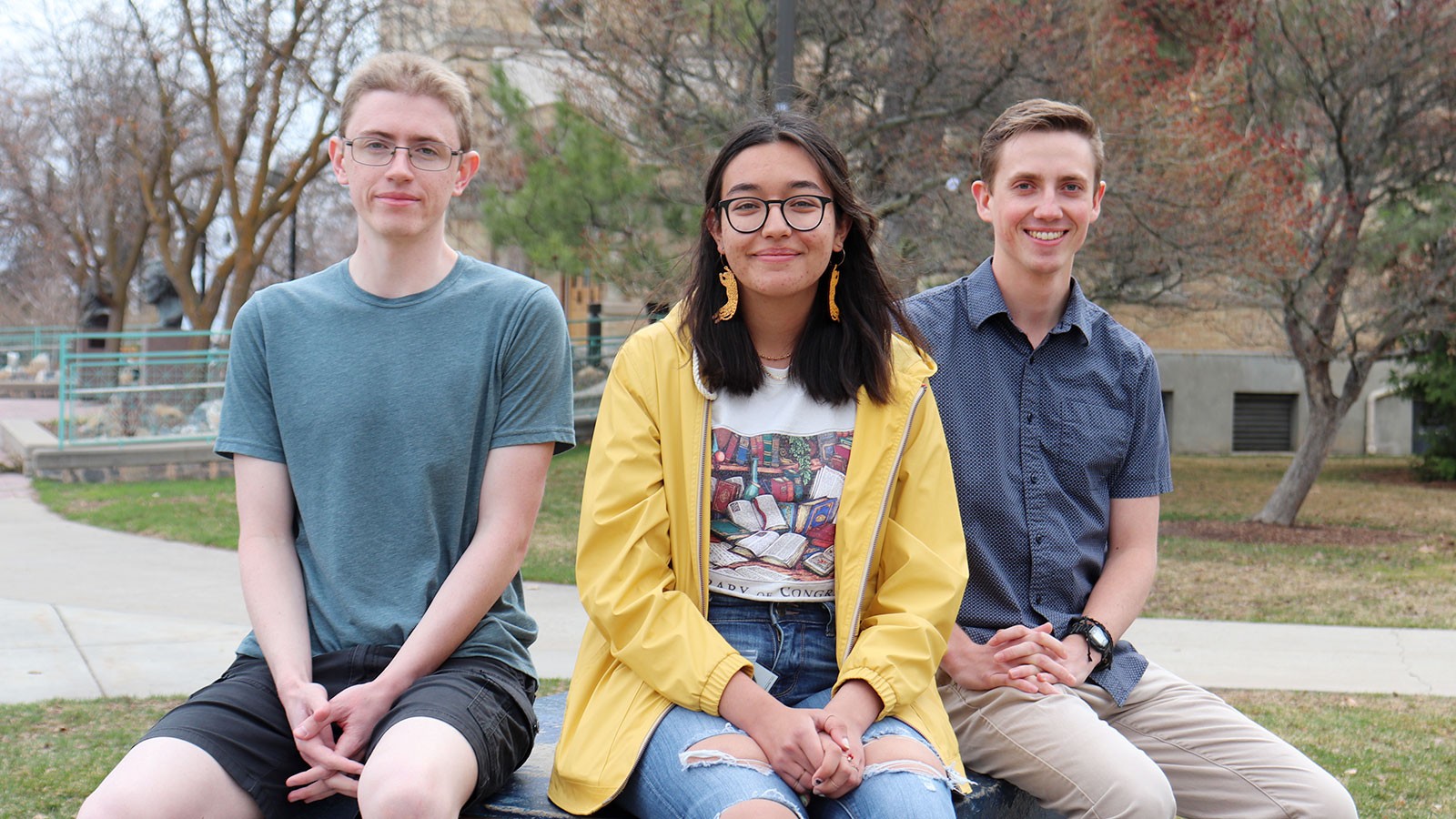 The awards were announced March 25 by the Barry M. Goldwater Scholarship and Excellence in Education Foundation, which administers the program. The Aggies are among 475 awardees selected this year from more than 1,242 nominees representing 433 institutions.

"Goldwater Scholars are selected from among the nation’s top STEM undergraduate scholars,” says USU President Noelle Cockett. “This well-deserved recognition is a testament to the exceptional achievements of our students in academics, research and service, as well as the outstanding mentorship by our faculty.”

Each year, USU may submit up to four nominations for the award; a process, coordinated by the USU Honors Program, that begins in November. Nominated this year, in addition to the award recipients, was physics major Heather Allen.

Award recipients receive one- or two-year scholarships of up to $7,500 per year toward annual tuition and expenses.

“All of the students who participated in this year’s Goldwater application process are outstanding undergraduate researchers, and our four nominees have demonstrated exceptional scientific research potential,” says Professor Kristine Miller, Honors Program executive director. “USU’s consistent success in the Goldwater competition results from a strong culture of undergraduate research and faculty mentoring, and the individual commitment of Physics Professor David Peak, who guides students through the application process. We are proud of all these students, and very pleased three have joined the ranks of Goldwater Scholars.”

A native of American Fork, Utah, Brewer is studying partial differential equations and nonlinear waves with faculty mentor Nghiem Nguyen in the Department of Mathematics and Statistics.

“My current project is studying the interaction of long and short waves in dispersive media,” he says.

Brewer is on his way, this week, to present his research at the 12th annual Institute for Mathematics and Computer Science (IMACS) International Conference on Nonlinear Evolution Equations and Wave Phenomena: Computation and Theory at the University of Georgia in Athens.

Brewer’s demanding academic schedule and research keep him busy, but he finds time to relax with the Aggie Game Night Club.

“I made some lasting friends in the club pre-pandemic, and I’ve been enjoying meeting new people now that it’s started back up again in person post-pandemic,” he says.

Brewer, who graduated from the Utah County Academy of Sciences in 2019, plans to pursue graduate studies in mathematics.

“My goal is to become a professor of mathematics,” he says.

Growing up in Romania, the closest Chirvasa usually found herself to actual wilderness was by watching Animal Planet. Notwithstanding the electronic distance, she became entranced by wild animals and felt drawn to ecosystems of all kinds. When she moved, at age 10, to the Salt Lake area with her mom, who was seeking social and educational opportunities, it was with the family dog on her lap.

As an outsider, and a student learning English for the first time, Chirvasa felt pressure to prove she could make positive contributions to her new community. Her spirited strategy was to move beyond the 'above and beyond' standards for kids her age; committing herself not only to academics, but to volunteer opportunities, work, internships and extracurricular activities.

The Undergraduate Research Fellow’s academic superpowers are her fearlessness and networking prowess. During a high school internship at the Bureau of Land Management, she probed her mentor for access to hands-on experiences in fisheries, and pounced when they surfaced. She later teamed with Tim Walsworth, from the Department of Watershed Sciences in the Quantitative Fisheries and Aquatic Ecology Lab, exploring how zooplankton affect algae blooms in Utah Lake to help maintain cleaner water. Confirming a relationship between carp and algae blooms would make it easier to support carp removal efforts, she said, which requires significant money and manpower to perform. She is also working with Andrew Kulmatiski from the Department of Wildland Resources looking at how plants in the western U.S. will be impacted by climate-change-caused shifts in precipitation.

Chirvasa is an Honors student, a Community-Engaged Scholar and a Quinney Scholar. Her next stop, she hopes, is Oxford. She has a goal to become a Rhodes Scholar and to work in conservation science, and hopes that her deep research experience and this award will help to make that more likely. Meanwhile, Chirvasa plans to embrace any opportunities that wander her way.

A Clovis, California native, Mills graduated from Clovis High School in 2017. The USU Honors student is an Undergraduate Research Fellow and was selected as a Peak Summer Research Fellow.

“My research involves studying the way light interacts with extremely small structures – specifically carbon nanotubes,” says Mills, who pursues research with Physics Professor T.-C. Shen. “My goal is to design and fabricate a material with very low reflection across a wide range of light wavelengths.”

Such a material, he says, could help increase precision of optical instruments and improve energy conversion in solar panels.

Mills says he’s motivated by “a fascination with the world.”

“I cannot, in my lifetime, hope to understand everything, but physics gives me a tool for understanding some things,” he says. “And the more I explore, the more I find there is to learn.”

Following graduation from USU, Mills plans to work toward earning a Ph.D. in physics, continuing to focus on optics and photonics.

2002
Jamie B. Jorgensen, physics and mathematics

Faculty members were recognized for earning a nationally recognized teaching credential co-endorsed by the Association of College and University Educators and the American Council on Education during a pinning ceremony on May 9. 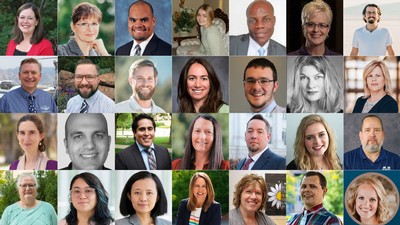 Extension professionals gathered for the 2022 Extension Annual Conference, where awards were given to faculty for outstanding programs and performance.