In a brilliant rainbow of color, the European Space Agency’s Jules Verne Automated Transfer Vehicle burst through the Earth’s atmosphere Sept. 29 and disintegrated — along with tons of waste picked up from the International Space Station.

“That’s exactly what it was designed to do,” says Utah State University physics professor Mike Taylor who, along with USU postdoctoral researcher Jonathan Snively, was among an international team of scientists aboard a NASA jet studying the disposable spacecraft’s dramatic re-entry.
Taylor and Snively departed NASA’s Dryden Flight Research Center in California Sept. 26 and headed to Tahiti to prepare for the unmanned space freighter’s return to Earth’s atmosphere. The Aggie physicists were tapped to capture video of the spacecraft as it plunged from orbit over a deserted swath of the South Pacific.
Aboard a NASA DC-8 observation plane, Taylor and Snively mounted five different types of video cameras to record data of the tour bus-sized ATV as it zoomed along a precisely calculated path and splintered into pieces.
“It was much brighter and more colorful than we expected,” Snively says. “We’re typically looking at natural phenomena — meteors in the Earth’s atmosphere. To see something large and manmade was a very interesting opportunity.”
The pair collected nearly 30 hours of data that they’ll be analyzing over the next year.
“Studying the spacecraft’s re-entry and how it reacted reveals valuable information about the behavior of and emissions from falling satellites — both manmade and natural,” Taylor says.
In 2006, Taylor photographed the re-entry of NASA’s Stardust capsule, which “acted like a giant meteor,” he says.
“We recorded carbon emissions from that craft — something no one else has seen,” Taylor says.
Named for the famed French science fiction writer, the Jules Verne, the first of Europe’s ATVs, was launched from French Guiana March 9. It successfully docked with the ISS about a month later, delivering tons of essential food, water, propellant and equipment. A welcome visitor, it corrected the space station’s drifting orbit and even helped the flying lab dodge passing space junk. Upon leaving, it took out the station’s trash.
Taylor and Snively’s flight was not so flawless. “We battled 160-mph head winds, so our pilots had a hard time keeping the NASA plane on a course to enable us to capture images of the ATV,” Taylor says.
The pair also recounted the challenge of mounting cameras in flight, getting ready to record data and dismantling and stowing equipment before landing — all in a confined space with multiple teams of scientists.
“Nothing could be mounted until after takeoff, such we had to work quickly and carefully to protect sensitive equipment and avoid any mishaps during turbulence,” Taylor says. “We had quite a spaghetti bowl of cables and were worried stiff about something getting disconnected. But everything worked and we’re delighted with the results so far.”
The Jules Verne represents an important milestone for the ESA and future ATV missions.
Related links:
“USU Researchers on Airborne Mission to Capture Meteor Images,” Utah State Today
USU Department of Physics
USU College of Science
Contact: Mike Taylor, 435-797-3919
Writer: Mary-Ann Muffoletto, 435-797-3517 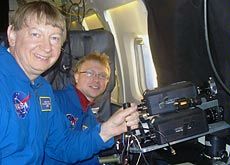