The Student Life section of Utah State Today highlights work written by the talented student journalists at Utah State University. Each week, the editor selects a story that has been published in The Utah Statesman or the Hard News Café, or both, for inclusion in Utah State Today.
Aggies Remember Friend Who Died in Crash
by Sari Montrone, Rachel A. Christensen in The Utah Statesman, Monday, March 8, 2010
A great USU scholar, leader, athlete, brother and friend passed away Saturday afternoon, March 6, to the shock and sadness of his friends and family.
USU student and Sigma Chi President Trent Walker, 24, died in a car accident in Spanish Fork Canyon.
Todd Johnson of Utah Highway Patrol said Walker’s pickup truck crossed the center line of traffic on Highway 89 near Birdseye in Spanish Fork Canyon and collided head on with a semitrailer. Walker was pronounced dead on the scene.
Born in Brigham City, or what he called “The Bay area – Willard Bay area,” Walker was a senior in public relations, the president of the Gamma Kappa chapter of Sigma Chi Fraternity, which he joined in 2006, an administrative assistant at Cache Valley Electric and held many other leadership positions within the USU and Cache Valley community.
Whenever Walker had a little free time, he spent it playing sports and helping others. He was the life of the party and brightened up the room with his contagious smile.
Brothers in his fraternity said he more than exemplified the Sigma Chi standard, which is “a man of good character, a student of fair ability, with ambitious purposes, a congenial disposition, possessed of good morals, having a high sense of honor and a deep sense of personal responsibility.”
“Trent was a natural leader, philanthropist, was a joy to work with and had a humble personality,” said Tiffany Evans, director of Student Involvement. “Our hearts go out to his family, friends and fraternity brothers. He will be missed.”
Walker just finished helping remodel the historic Sigma Chi house, which he had been working on for more than a year with getting donations from alumni, helping with the plans and keeping a watch on the transformation, which was finished in December. He was the first president in the new house and did the first initiation of the house. As a rush chairman in fall 2008, he rushed and initiated the 2,000 member of the Gamma Kappa chapter of Sigma Chi.
His family and friends say every moment with Walker was a good memory, and remembered that he led by example, was never mean to anyone and was charismatic, congenial and selfless. His Sigma Chi brothers talked of how important he was to the success of the fraternity, especially with remodeling the building and members of the Sigma Chi house, but how his best contribution was just being himself.
A memorial service will be held at 1 p.m. Thursday, March 11, in the Kent Concert Hall, Chase Fine Arts Center.
– sari.e.montrone@aggiemail.usu.edu
– rac.ch@aggiemail.usu.edu 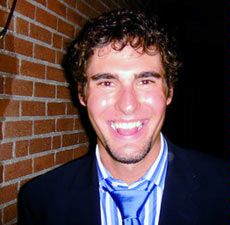 Trent Walker, president of the Sigma Chi fraternity, died in a car accident Saturday. Walker's friends said he was a natural leader with a contagious smile (photo courtesy of Brett Lopinsk, published in the USU Statesman Online).