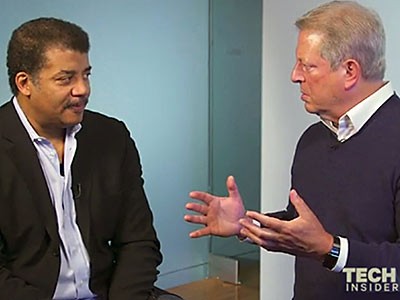 When Al Gore and astrophysicist, science communicator-to-the-masses Neil deGrasse Tyson sat down for a chat on the April 11, 2016, episode of the latter’s “Innovators” program on Tech Insider’s StarTalk Radio Show, the topic turned to the ethics of biotechnology.

The two marveled at the technology and, while both agreed they were “okay” with this type of research, they urged caution with emerging genetic engineering.

“That gets creepy,” Tyson said.

Interestingly, “creepy” is exactly the word Gore frequently uses to describe a vague uneasiness many feel when confronted with rapid technological changes.

No, he isn’t making a clever pun about arachnids. Rather, in his recent book, The Future: Six Drivers of Global Change, Gore defines “creepiness” as “a comparably indeterminate ‘pre-fear’ that many feel when contemplating some of the onrushing advances in the world of genetic engineering.”

Even so, Lewis’ goats and the corresponding research continue to capture people’s imaginations. In addition to the transgenic ruminants, the USU professor also produces synthetic spider silk from transgenic alfalfa, silkworms and bacteria. He regularly fields media inquiries from the BBC, Associated Press, the Discovery Channel and more.

Named the College of Science’s 2016 Undergraduate Research Mentor of the Year, Lewis and his students are busily exploring a variety of future applications for his lab’s products. Undergrads Breton Day and Danielle Gaztambide recently presented findings on using the silk for gels, adhesives and coatings for medical implants at the 2016 Material Research Society Spring Meeting in Phoenix.

“Our silk solutions are made from just protein and water,” says Gaztambide. “They don’t cause an immune response or inflammation when used in the human body, which greatly reduces the risk of infection and offers a tremendous advantage over conventional materials.”

With a grant from the U.S. Army, the Lewis Lab is also investigating use of synthetic spider silk fabric to produce military clothing that doesn’t melt (and cause further injury) during searing temperatures wrought by explosive devices.

“Spider silk can produce fabric that’s lighter, stronger and stretchier than nylon,” Lewis says.  “This could make a big difference to troops carrying heavy gear in harsh conditions. Plus, in a fire or explosion, it simply chars and breaks down.” 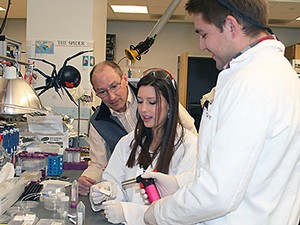 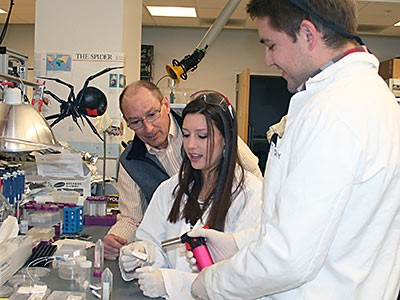