Utah State University alum Lars Peter Hansen is the recipient of a prestigious national award for economics research. Hansen, who serves as the Homer J. Livingston Distinguished Service Professor in the Department of Economics and Statistics at the University of Chicago, received the 2008 CME (Chicago Mercantile Exchange) Group-MSRI Prize in Innovative Quantitative Applications.
The annual prize recognizes mathematical or statistical contributions to the understanding of market behavior. Hansen received the prize medal, along with a $25,000 cash award, in an Oct. 24 ceremony at the Chicago headquarters of CME Group, an international financial services company.
CME offers the honor in conjunction with the Mathematical Sciences Research Institute, a research center in Berkeley, Calif.
Leo Melamed, a member of the prize selection committee and former head of CME Group, said Hansen richly deserves the award, crediting him with developing “one of the top statistical tools for the analysis of financial data.”
“(His) decades of mathematical research have brought about significant advances in the world of financial economics,” Melamed said.
Hansen is the son of renowned former USU academic vice president and biochemistry professor R. Gaurth Hansen and Anna Lou Rees Hansen. He earned a bachelor’s degree in math from USU in 1974.
“My time at USU was very important to my development as a scholar,” he said. “I remember well the influence of such faculty members as Mike Windham in mathematics, Bartell Jensen and Mike Lyons in economics and Doug Alder in history.”
Hansen said that Windham’s classes gave him “a great perspective on mathematics,” while Jensen and Lyons prepared him to pursue graduate studies in a top economics program.
“Dr. Alder told me ‘Do something special and don’t just imitate others,’’ he said.
Hansen completed a doctorate in economics from the University of Minnesota in 1978. In 1981, he joined the University of Chicago’s economics and statistics department, where he excelled in the field of financial data testing and estimation.
“Probability theory and statistics provide wonderful tools to explore financial economics,” Hansen said. “I expect they will continue to provide insights into the understanding of the economic underpinnings of financial markets just as they have served other scientific fields of endeavor.”
Hansen is a member of the National Academy of Sciences and American Academy of Arts and Sciences, a fellow of the Econometric Society and a fellow of the American Finance Association. He is a former John Simon Guggenheim Memorial Foundation Fellow and Sloan Foundation Fellow. He is the recipient of the 2006 Erwin Plein Nemmers Prize in Economics from Northwestern University, a Faculty Award for Excellence in graduate teaching from the University of Chicago, and co-winner of the Frisch Medal from the Econometric Society.
Related links:
Contact: Lars Peter Hansen, l-hansen@uchicago.edu
Writer: Mary-Ann Muffoletto (435) 797-3517, maryann.muffoletto@usu.edu 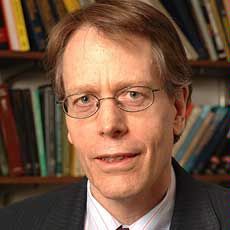 USU alum Lars Peter Hansen, professor at the University of Chicago, says his years at Utah State 'were very important to my development as a scholar.'