Three Utah State University scientists are recipients of the National Science Foundation’s most prestigious grant program for early career development of junior faculty. Biochemist Sean Johnson, geophysicist Anthony “Tony” Lowry and ecologist Ethan White, all of the College of Science, received 2010 NSF CAREER Awards in recognition of demonstrated excellence in research, teaching and the integration of education and research.
“The fact that three scholars in the College of Science are receiving NSF Career Awards is truly a wonderful sign for the future of our college and our university,” says Jim MacMahon, dean of USU’s College of Science. “Ethan, Sean and Tony bring honor to all of us and saying ‘Congratulations’ cannot convey how proud I am to be associated with these outstanding scientists who are excelling in teaching and research.”
CAREER awards provide funding for up to five years to support each recipient’s proposed research and teaching projects. For the first year, the College of Science recipients’ combined awards exceed $1 million.

Sean Johnson, Department of Chemistry and Biochemistry
Johnson, an R. Gaurth Hansen Assistant Professor of Biochemistry at USU, harnesses the power of X-ray crystallography to make the underlying structures of biological processes crystal clear.
“To understand biology, you need to understand its structure,” says Johnson, a Cache Valley native who graduated from USU in 1996 and rejoined the university as a faculty member in 2006. “X-ray crystallography is the workhorse of determining DNA and protein structures.”
Johnson is studying a specific ribonucleic acid (RNA) protein called the “Mtr4” helicase, an enzyme involved in the separation of DNA double helices. Mtr4 initiates this process, which is critical to biological cell function and vitality.
“Like a zipper on your coat, Mtr4 separates DNA strands to reveal the genetic information inside,” he says. “It’s part of the TRAMP protein complex that decides which information is good and which needs to be discarded — a kind of quality control process.”
Prior to joining USU’s faculty, Johnson earned a doctorate from Duke University and served as a postdoctoral fellow in the University of Utah medical school’s crystallography lab. Working at the U., he says, allowed him to acquire used crystallography equipment for USU and to establish relationships that will be valuable for future collaborations, including USTAR-funded efforts, between the two research universities.
“My goal in joining USU has been to bring the study of structural biology to the university,” Johnson says. “These days, anyone involved in biological science needs to know about structure. I’m excited that we’re able to offer this study for our students and to conduct research using crystallography here at USU.”
Tony Lowry, Department of Geology
Current efforts to predict earthquakes are similar to what weather forecasting was like in the 19th century, Lowry says.
“Earthquakes, mountain-building and other expressions of continental tectonics depend fundamentally on how rocks flow in response to stress,” says the assistant professor who joined USU in 2006. “But we don’t yet have the tools to reach into the Earth’s depths and measure temperature, rock flow, fluid content and other properties needed to understand these processes.”
Think you’re standing on solid ground? Think again. Miles beneath our feet, rock reaches the consistency of taffy under intense heat and pressure. Like placing a heavy stone into mud, the weight of large loads, such as piling of sediments or volcanic flows on the Earth’s surface, cause gooey hot rock-at-depth to ooze horizontally and stretch and pull the Earth’s crust like skin.
Looking at the mountains surrounding Cache Valley, Lowry notes that geologists can easily view the vestiges of ancient Lake Bonneville’s shorelines. They can see that shorelines on mountain ranges near the lake’s center are now tens of feet higher than those at the edges. But how high did the lakebed ultimately rise after the lake disappeared and the weight of the water was removed?
“There’s too much uncertainty and we want to improve on that,” he says. “New tools for measuring topography and new images of the subsurface being gathered by NSF’s EarthScope seismic arrays can help us answer these kinds of questions. We know that all tectonics are a response to the effects of gravity and, with more precise measurements of stress and strain, we can better understand flow properties of rock and how these flow properties change from one place to another.”
Lowry says knowledge of rock flow properties has the potential to greatly improve understanding of earthquake physics, seismic hazards and mountain-building processes.
“The research I’ll be pursuing with both graduate and undergraduate researchers could shed new light on the earthquake cycle and the evolution of stress on faults,” he says. “And it may also help to inform studies of glacial melting and other climatological changes.”
Ethan White, Department of Biology
A macroecologist, Ethan White looks at “the big picture,” investigating how climate change, invasive species and other important factors impact ecological systems at continental to global scales.
Carrying out experiments at this level is difficult, if not impossible, White says, so scientists rely on analyses of smaller, though still large-scale, observational data to predict how these systems will respond at worldwide scales. And that’s where investigators hit a roadblock that conjures memories of lines from Samuel Taylor Coleridge’s epic poem, The Rime of the Ancient Mariner:
“Water, water, everywhere, nor any drop to drink.”
“We have access to a large number of accurate, macroecological datasets from sources all over the world but no way of consolidating this vast ocean of data,” says White, who joined USU’s faculty in 2007. “Plus, most data collection focuses on a single group of species, which limits the generality of the results.”
Reaching beyond biology, White proposes an interdisciplinary approach using tools from computer science, statistics and physics, combined with established ecological models, to predict major ecological patterns from diverse datasets.
“Our plan is to develop Web-based tools to automate complicated and cumbersome database tasks and allow ecologists to rapidly determine whether or not certain patterns are evident at global scales,” says the assistant professor in USU’s Department of Biology. “This combined research and educational program has the potential to unlock the data logjam and allow the field of ecology to advance with greater speed and efficiency.”
Related link:
USU College of Science
Contact: Sean Johnson, 435-797-2089, sean.johnson@usu.edu
Contact: Tony Lowry, 435-797-1273, tony.lowry@usu.edu
Contact: Ethan White, 435-797-2097, epwhite@biology.usu.edu
Writer: Mary-Ann Muffoletto, 435-797-3517, maryann.muffoletto@usu.edu 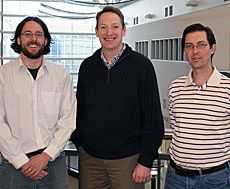