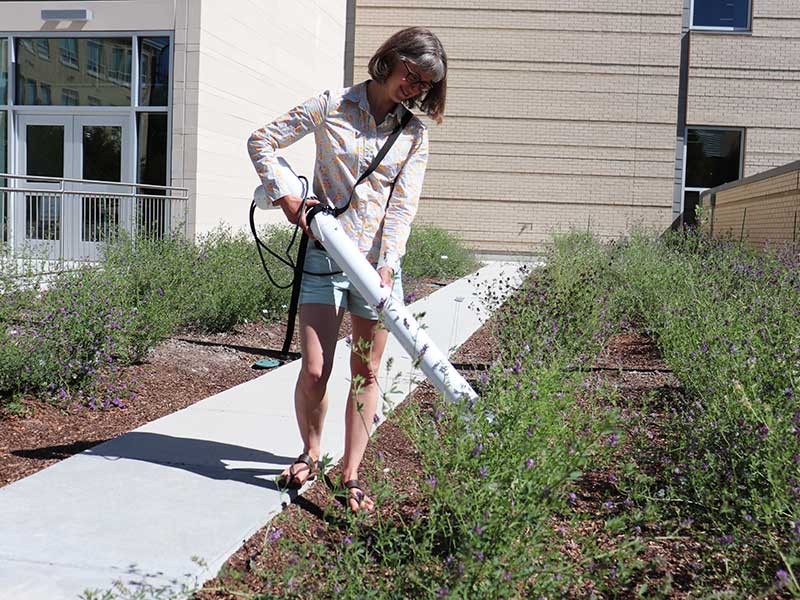 USU Biology lecturer Lauren Lucas collects bugs in the Miller Life Sciences Laboratory Garden outside the Life Sciences Building on campus. Lucas is seeking citizen scientists of all ages to participate in an evolutionary ecology study.

“I often cite Wilson’s quotes in my classes,” says Utah State University ecologist Lauren Lucas. “And one of my first goals, as I meet new students, is to encourage them to observe nature.”

Eschewing a canned approach to learning biology, Lucas encourages students to get out of the classroom and into the field. As part of a five-year, National Science Foundation-funded evolutionary ecology study with fellow USU researcher Zach Gompert and colleagues at four other institutions, Lucas is encouraging everyone, from children to seniors, to join in a citizen science project aimed at exploring plant, insect and microbial interactions.

“Our study focuses on alfalfa and the organisms that interact with it,” says Lucas, lecturer and lab coordinator in USU’s Department of Biology. “Alfalfa is one of our region’s most important crops, but it’s also widely found in non-cultivated areas, like roadsides and hiking trails.”

Why alfalfa for an evolutionary ecology study?

“If this naturalized weed was eradicated, the diversity of invertebrates, including, for example, the beautiful Melissa blue butterfly, would decrease,” she says.

“We’re asking science enthusiasts of all ages to share their observations of any invertebrates on alfalfa around our community and around the West on our ‘Bugs on Alfalfa’ page on the iNaturalist.org social media platform,” she says.

It’s quick and easy, and an activity families and friends can enjoy together while out and about admiring the region’s natural beauty.

“All you need to be able to do is identify an alfalfa plant, watch for critters interacting with the plant, capture an image with your camera, and then upload the image to our page,” Lucas says. “Our page includes information to help you learn to identify alfalfa.”

Observations are an important first step in the research process, she says.

“With the data we collect, we can investigate key determinants of interactions between the plants and animal organisms,” Lucas says. “With my colleagues and students, we’ll conduct experiments with plants in varied conditions, perform DNA tests on plants and bug specimens and use computer modeling to project global changes in biodiversity.”

The more information the scientists collect, she says, the better they can understand the complex plant, insect and microbial interactions.

“Getting the community involved allows us to share the fun of science,” Lucas says. “It also reminds us of the many ecosystem services – like pollination of our crops – that nature provides for us.” 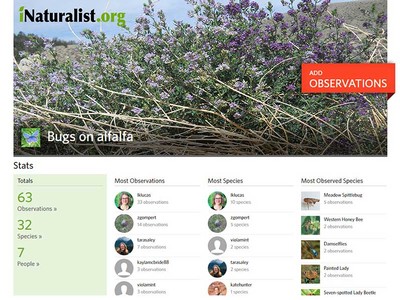 Citizen scientists of all ages can upload images of nature observations to USU's 'Bugs on Alfalfa’ page on iNaturalist.org. The information fuels a National Science Foundation-funded study by USU scientists, as they investigate biodiversity. 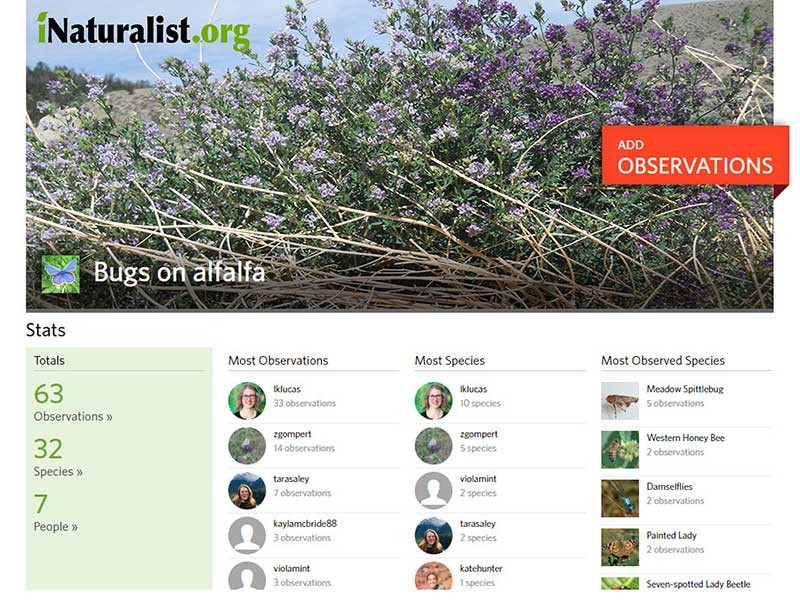 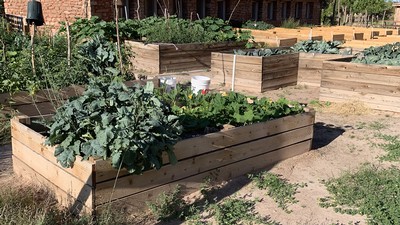 A new project at USU will investigate how water market strategies might respond to climate change and drought while supporting agriculture, ecosystems and communities.