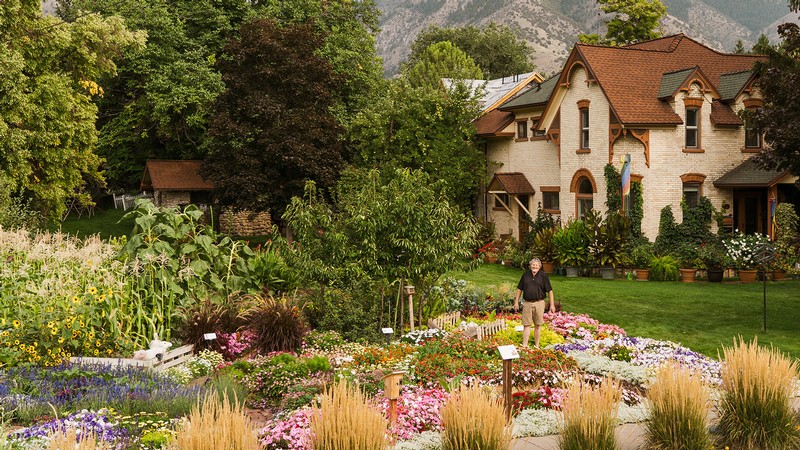 This year's garden theme at 82 Crockett Avenue in Logan is a tribute to Charlotte's Web. Photos by McKay Jensen 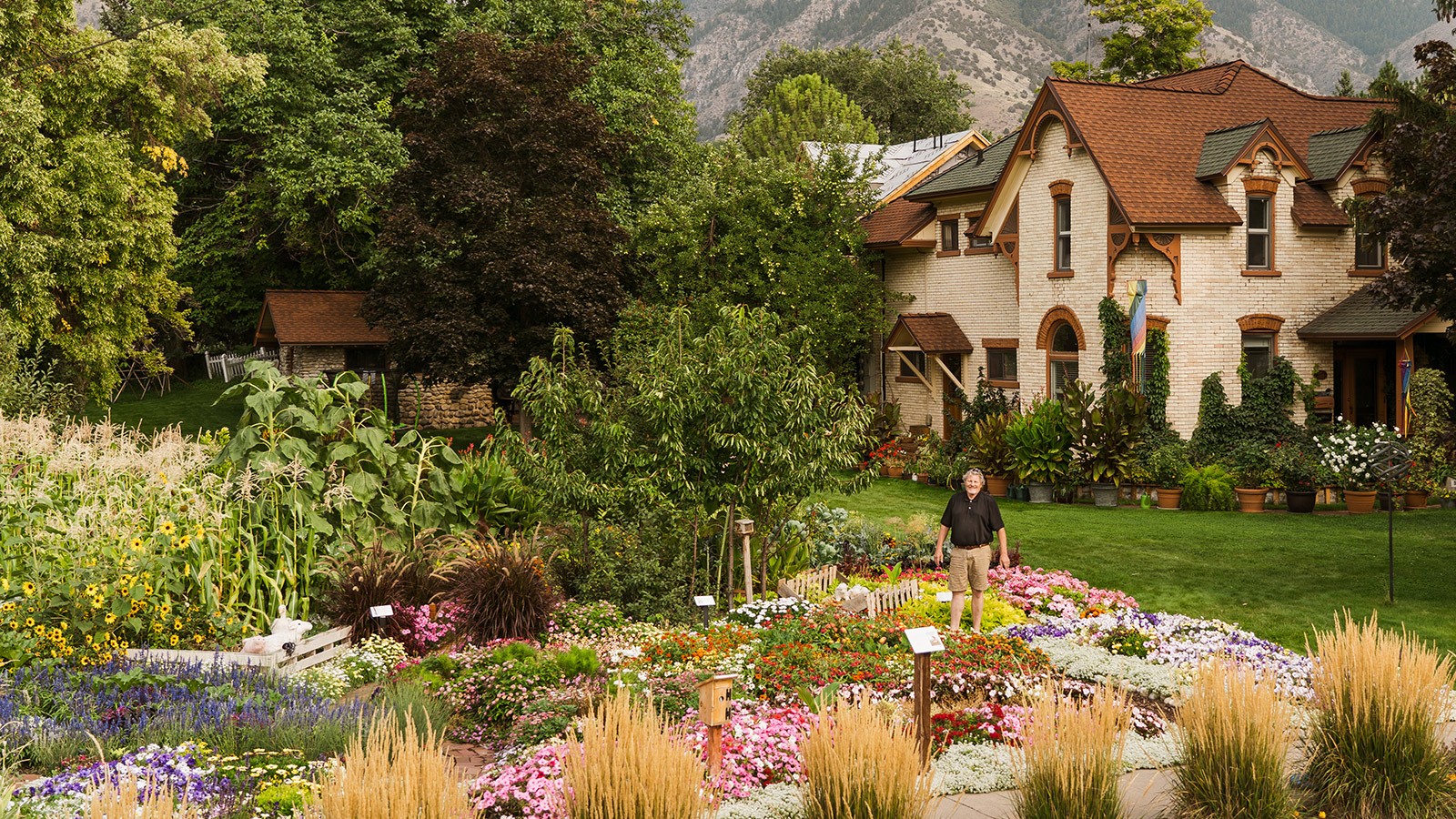 Most successful home gardeners begin with a plan. Few, however, go to the lengths of planning that plant science Professor Bruce Bugbee and his wife Diana West commit to each year that transforms part of their yard into a themed garden and a local landmark.

Their 2021 garden is a tribute to the children’s book Charlotte’s Web, complete with a little free library that Bugbee and West stocked with paperback editions of the book. Part of the daily rhythm at the house this year includes bringing Charlotte, the toy spider, the stuffed animal sheep, Wilbur the pig, and Templeton the rat, inside each night after people have come by on their evening walks, and placing the animals back in their garden pens each morning.

The garden plot at 82 Crockett Avenue in Logan draws visitors from spring through the fall who come to see each year’s theme illustrated in colorful flowers. In recent years the flowers have been gifted by Brian Gold, owner of Pineae Greenhouses in Ogden, who also supports some of the research in Bugbee’s crop physiology laboratory at Utah State University.

The partnership is symbiotic. Pineae is a 30-acre greenhouse operation and Bugbee’s research has long focused on growing plants in controlled environments. And since “controlled environment” is a relative term, problems still arise for growers even when variables like light, water, and nutrients are regulated rather than left to nature.

When Gold has a question or a problem to solve, Bugbee is ready to explore the question and help find answers. And when a technique or tool developed and tried in the relatively small spaces of Bugbee’s lab and greenhouses needs to be scaled up and tested more broadly, Pineae is a great partner with an operation so large that if people in Utah, Idaho, Wyoming or Western Colorado have bought bedding plants, chrysanthemums, or poinsettias from a big box store, they likely got their start at Pineae Greenhouse, Inc.

“Brian is very interested in innovation and runs a large operation,” Bugbee said. “He is generous and allows our plant science students to tour his greenhouses and really see that part of the industry.”

Bugbee’s garden hasn’t always featured annual themes and elaborate floral designs. It started as a vegetable garden prominently situated along the sidewalk in front of Bugbee’s historic home. The home was built in 1887 by Logan’s first mayor, Alva Crockett, and was added to the National Register of Historic Places in 2009, following years of renovation and restoration.

Beginning in the mid-1980s, Bugbee planted vegetables in geometric patterns like a French potager or kitchen garden. Over time, the plans included flowers and evolved to creating flower pictures, beginning with the silhouette of a bicycle made of contrasting purple and white alyssum and framed by rows of vivid yellow and orange marigolds.

Since then the garden has displayed a world map and peace sign designed at the start of the First Gulf War, a large beehive, a rainbow arch, the Olympic rings and torch, a large geometric flower, and a dove of peace. In those early days of the garden as art, Bugbee’s daughter, Anna, helped create designs and plant them. Now an adult, Anna has studied art and works with a landscaping company designing spaces for other people. USU students in Bugbee’s laboratory and others expect invitations to spring planting days that have become annual work/party events.

“Undergrads, grad students, anyone who wants to help shows up and it’s nice to get it all planted at once so we can start watering,” Bugbee said. “Through the summer Brian Gold sometimes comes up to talk with me about his greenhouses and to check on the garden. He’ll sometimes notice a bare spot and come up a few days later with a flat of flowers to fill in.”

There have been years with garden designs that honored important figures including Albert Einstein, Charles Darwin, Rosa Parks and Buckminster Fuller. There was a year of celebrating the life and work of Bugbee and West’s neighbor, the late Jack Keller, whose skills as an irrigation engineer helped bring clean water to people in developing countries around the world.

“His family helped us build human-powered water pumps so people could come into the garden, learn about Jack, and pump water in the garden,” Bugbee said.

In recent years, Diana has added brick paths that invite passersby to walk into the garden (aided by a neighbor’s donation of pavers that had not become a patio) and celebrations of cultural touchstones like the world of A.A. Milne’s Winnie the Pooh — including a small bridge over a “stream” suitable for imagining games of Pooh Sticks.

“Having Brian Gold’s support has encouraged us to keep doing it, but the garden is really for the people who come by every year to enjoy it,” Bugbee said. “People bring their kids and those kids have grown and bring their own children back to see the garden. People leave thank you notes in the garden or at our door. We have considered not doing it, but when people stop you in the grocery store in the winter and ask what the next theme will be, we keep going.”

Some of those notes are displayed in the kitchen, “We LOVE your yard. Thanks for making this valley a gorgeous place,” and “It’s the first place I stop after a summer away. It is educational, inventive, and just downright lovely each year,” and “Thank you so much for your garden this year. Yet again you have brought joy to your community, from a grateful Summer Citizen from Arizona.”

So this winter when the Charlotte’s Web garden is gone, West and Bugbee will be narrowing down ideas for the 2022 theme and planning an early spring walk with Gold through his expanses of greenhouse plants as they choose just the right colors and textures for the new design.

On the first page of a photo book documenting 25 years of the garden’s history is a Margaret Atwood quote: “Gardening is not a rational act.” That may be true, but rational or not, for the foreseeable future the garden at 82 Crockett Avenue will continue to delight the people who build it and those who come by to enjoy it. 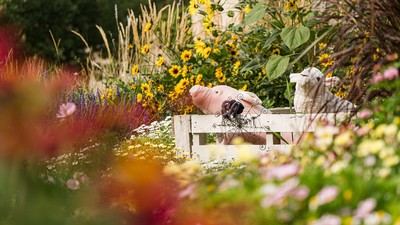 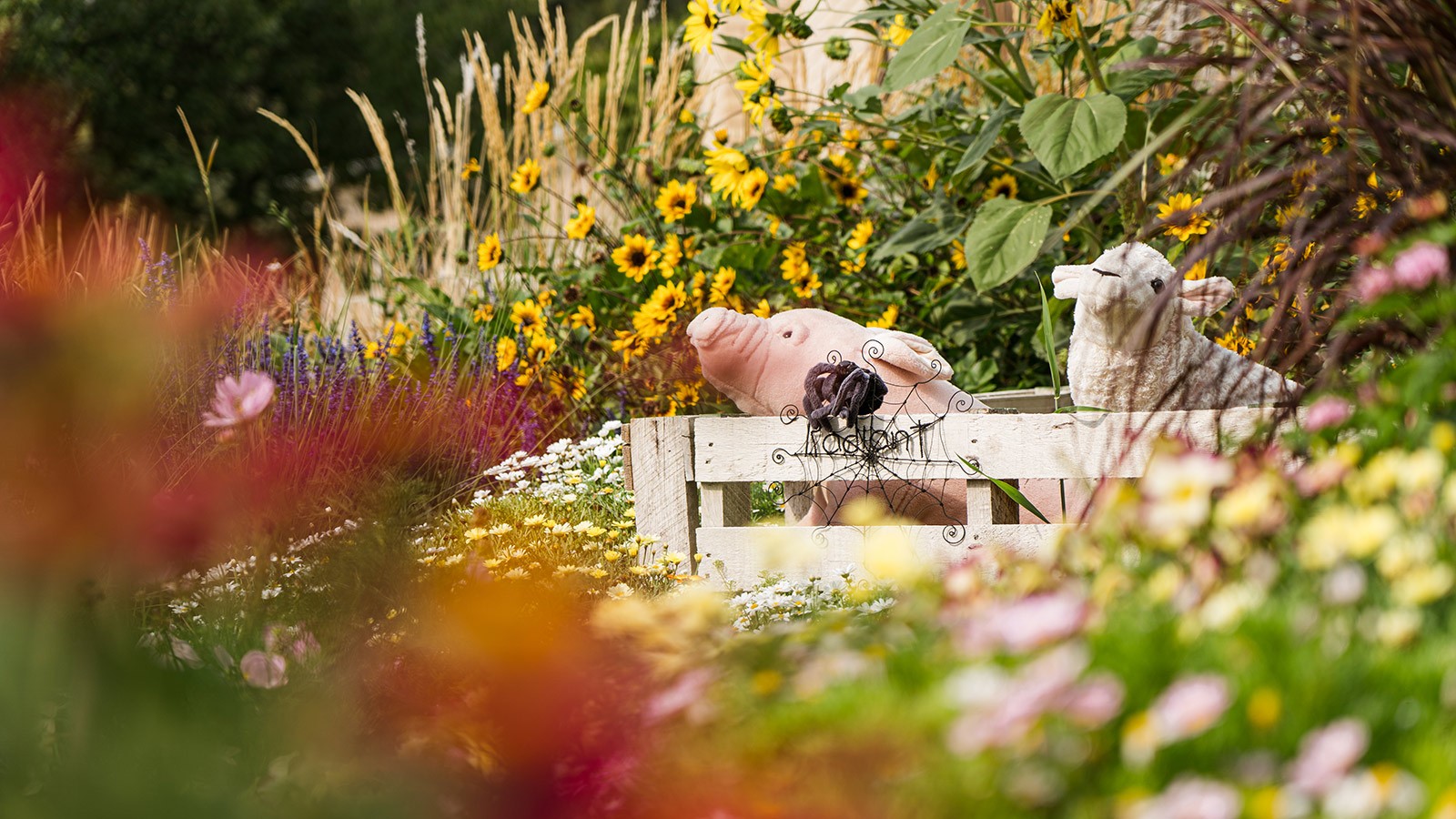 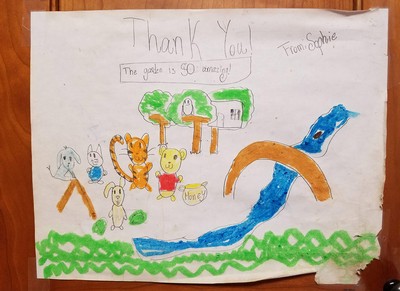 One of the many thank you notes Bruce Bugbee and Diana West have received, this one from a young admirer of a past summer's Winnie the Pooh-themed garden. 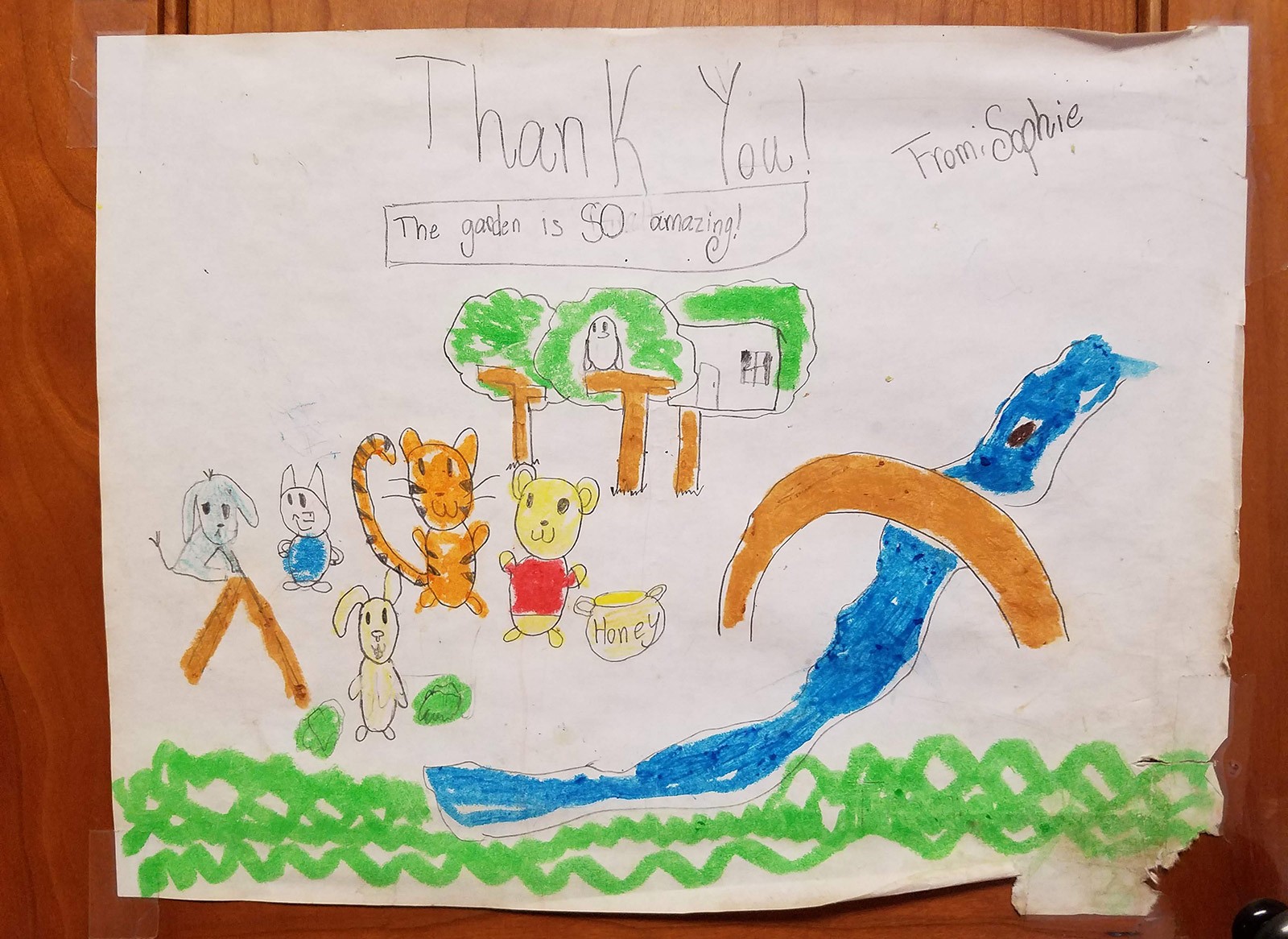 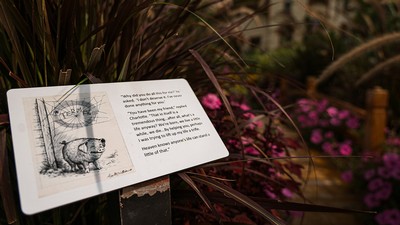 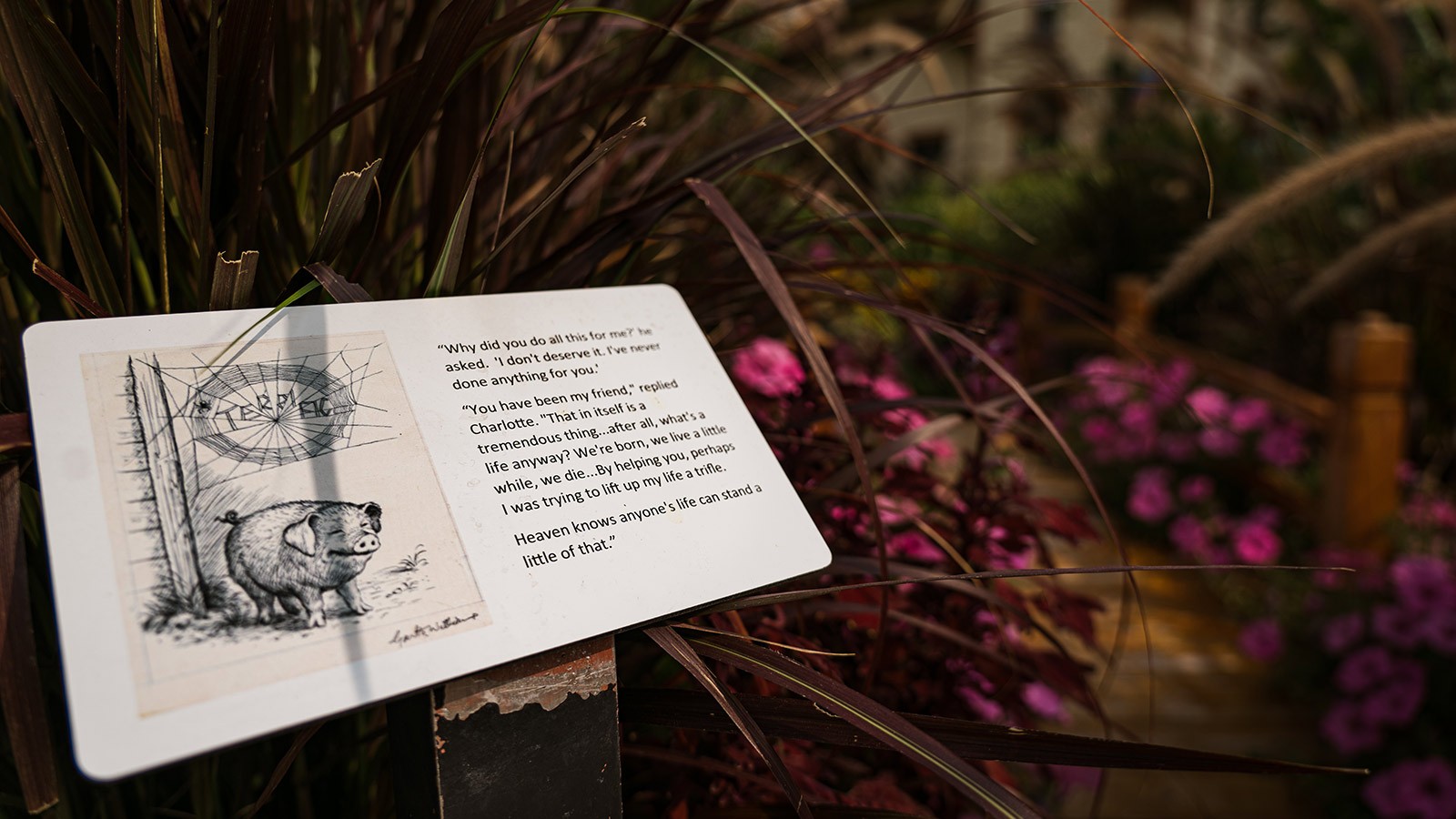 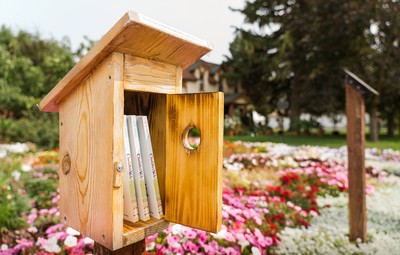 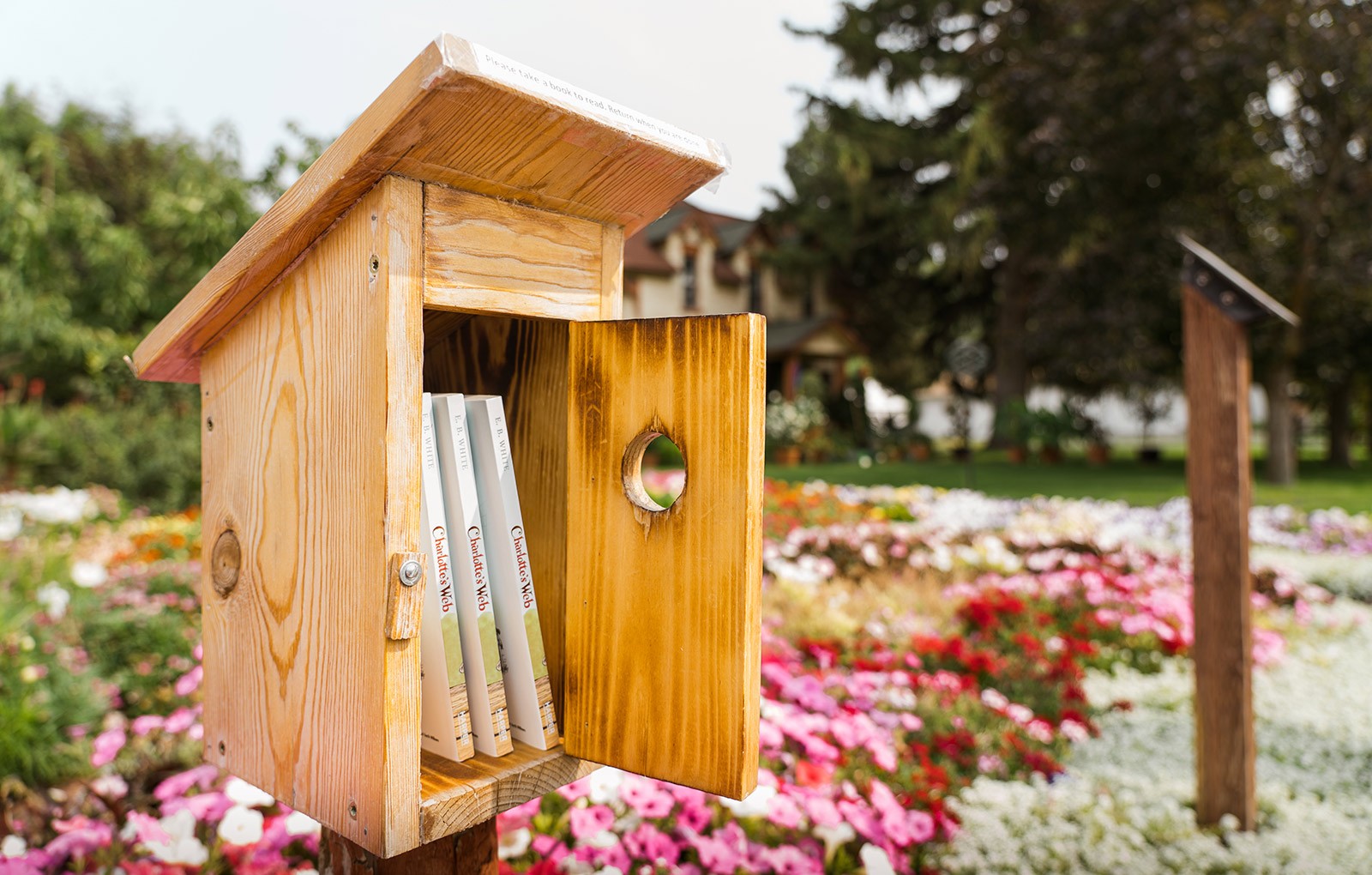