Utah State University Goldwater Scholar Jodie Barker-Tvedtnes is a recipient of a 2008 Outstanding Student Award for Undergraduate Research from the Society of Physics Students. One of just three undergrads in the nation honored with the award, the physics major receives an all-expenses-paid trip to the International Conference of Physics Students Aug. 6-13 in Cracow, Poland.
“I’m very excited about this honor and the opportunity to meet with physics students from around the world,” says Barker-Tvedtnes, who has been invited to present her research in Poland and at the SPS national meeting next spring.
The undergrad’s award also includes a cash award for USU’s SPS chapter, a group that Barker-Tvedtnes helped revive when she arrived on campus on a Presidential Transfer Scholarship from Salt Lake Community College a few years ago.
“The chapter was essentially dormant when I got here,” the Salt Lake City native says. “But when I learned about the opportunities SPS offered – national scholarships, projects, activities – I worked with faculty and fellow students to get it going again.”
“Jodie is a ‘power house’ of activity and capability,” says her mentor Mike Taylor, physics professor. “She’s an excellent leader, displays exceptional poise and has a strong experimental aptitude.”
He notes that, while tackling a significant academic load and research efforts, Barker-Tvedtnes coordinated chapter gatherings and field trips for students along with community outreach projects, including the chapter’s popular stargazing parties on the USU quad.
With Taylor, Barker-Tvedtnes studies the mesosphere’s mysterious noctilucent clouds – also known as polar mesospheric clouds or PMCs – which form at the edge of space.
“PMCs are ice clouds that form in the summer months near the extremely cold mesopause region – some 50 miles above the earth,” says Barker-Tvedtnes, a Willard L. Eccles Undergraduate Research Fellow. “From the ground, these noctilucent or ‘night-shining’ clouds are only visible during twilight hours at high latitudes.”
She spent five weeks in Alaska last summer studying the elusive formations with Taylor and fellow students. Taylor is a member of NASA’s science team for the Aeronomy of Ice in the Mesosphere or “AIM” mission.
NASA launched the AIM satellite into orbit April 25, 2007, to collect information on how and why PMCs form. During their summer trip, Taylor and his student team captured data from two field sites, located about 30 miles apart on the tundra of eastern Alaska and western Canada, to compare with data received from the AIM satellite.
“We became nocturnal,” Barker-Tvedtnes says, although, because of the latitude of the areas in which the team was working, it never became completely dark.
“Starting at midnight each day, we’d have about five hours of twilight,” she says. “We’d spend those hours tracking noctilucent clouds across the horizon and photographing the formations with digital and video cameras.”
Back in Logan, Barker-Tvedtnes is comparing the ground-based data with information captured by the satellite. She presented her research in a number of forums, including regional physics conferences and USU’s undergraduate research showcase this past spring. Following graduation next spring she plans to continue her studies at the graduate level and conduct research in upper atmospheric physics at a government or academic institution.
Barker-Tvedtnes’ dedication is all the more remarkable considering she’s a single mom, juggling work, study and physics chapter duties with the care of her 7-year-old daughter, Kalila.
Balancing responsibilities is a challenge, she admits, but receiving the Willard L. Eccles fellowship has afford her the opportunity to spend time in the lab and have greater control of her schedule.
“My work allows me the flexibility to conduct research while my daughter is in school and keep my evenings free for her,” Barker-Tvedtnes says. “I’ve also appreciated the support from my professors. They really make an effort to involve students in undergraduate research.”
Related links:
Contact: Jodie Barker-Tvedtnes [jodie13@comcast.net]
Contact: Mike Taylor (435) 797-3919, [mike.taylor@usu.edu]
Writer: Mary-Ann Muffoletto (435) 797-3517, [maryann.muffoletto@usu.edu] 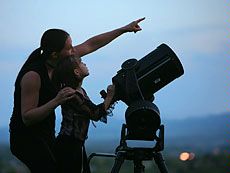 Goldwater Scholar Jodie Barker-Tvedtnes and her young daughter Kalila marvel at the wonders of the night sky. 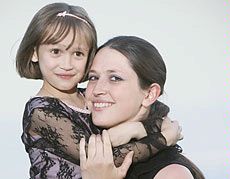 Tvedtnes is one of three recipients nationally of the Society of Physics Students' 2008 Outstanding Student Award for Undergraduate Research. She travels to the society’s international conference in Poland Aug. 6.