Today, flowering plants inhabit nearly every corner of the globe, yet how did these early, heat-lovin’ blooms adapt to a changing climate that includes bitterly cold temperatures and snowy winters?

That’s a question Utah State University ecologist Daniel McGlinn, along with researchers from multiple universities, tackled in a study published Dec. 22, 2013, in Nature.

“We wanted to find out how plants evolved to keep from freezing to death,” says McGlinn, a postdoctoral researcher in USU’s Weecology Lab in the Department of Biology and the USU Ecology Center. “To address this kind of question, our team needed to synthesize huge data sets.”

“Freezing is a challenge for plants,” says Amy Zanne, the study’s lead author and an assistant professor of biology in the George Washington University’s Columbian College of Arts and Sciences. “Their living tissues can be damaged. It’s like a plant’s equivalent to frostbite. Their water-conducting pipes can also be blocked by air bubbles as water freezes and thaws.”

The researchers identified three, repeated evolutionary shifts they believe flowering plants made to fight the cold, which include seasonal shedding of leaves, narrowing of water-conducting pathways and avoiding the cold by retreating underground.

To identify these adaptions and their likely progressions, the team built a database of nearly 50,000 plant species using resources from the Global Biodiversity Information Facility and a global climate database.

“My role in the study was assembling more than 47 million geographic records and the corresponding climate data,” McGlinn says.

The team’s timetree is the most comprehensive view yet into the evolutionary history of flowering plants.

“Until now, we haven’t had a compelling narrative about how leaf and stem traits have evolved to tolerate cold temperatures,” Zanne says. “Our research gives us this insight, showing us the ‘whens,’ ‘hows’ and ‘whys’ behind plant species’ trait evolution and movements around the globe.” 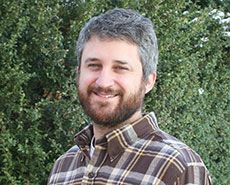 USU postdoctoral researcher Daniel McGlinn is among authors of a Dec. 22 paper in 'Nature' explaining how flowering plants have evolved to withstand harsh, snowy winters. 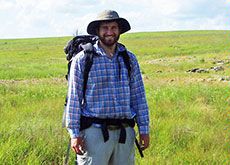 USU ecologist Dan McGlinn assembled more than 47 million geographic records and the corresponding climate data to contribute to the NSF-funded study, which led to the creation of the largest, dated evolutionary 'timetree' to date.