John Mussler often hears farmers say "If I had a device on my tractor that did (blank) I could continue to (blank)," or "If my barn had a (blank) that would enable me to (blank), then I wouldn't have to hire someone to milk my cows."

He knows devices that fill in those blanks are available, but most farmers do not. To spread the word, this Utah State University student, six credits shy of his bachelor's degree in agriculture systems and technology (ASTE), is building a Web site to provide information about assistive technology devices for farmers.

The Web site, http://www.aste.usu.edu/agrability/atframeset.htm, actually shows these devices at work.

"Just about every farmer has some sort of disability, whether it is back problems or arthritis," Mussler said. "The average person probably wouldn't think of it, but it is a widespread issue."

The Utah Agriculture Statistics Service estimates there are about 62,000 Utahns involved in agriculture. Mussler figures anywhere from 9,000 to 18,000 of them suffer from a disability, after considering a Purdue University study that estimated 17 percent of the general population has a disability hindering daily activities.

Mussler said the numbers are not surprising because the Bureau of Labor Statistics lists farming as one of the most dangerous occupations, second only to mining. It is a physically demanding job that requires heavy lifting, moving and operating complicated machinery and working around unpredictable animals.

Even though most equipment has protective features now, few farmers can afford it, Mussler said. Another complication for farmers is retirement, or the lack thereof. In a "normal job," most people retire around age 60 or 65, Mussler said, but agriculturists work "until they die."

"It's their way of life," he said. "It's something that is bred into you."

Mussler was bred into farming on a small farm in Thatcher, Idaho, where his family raised alfalfa, wheat barley and beef cattle. For a while he tried to escape his roots, but ended up embracing them.

"I couldn't wait to get out of Grace, I was fed up with farming," he said. But not long after he got away, he missed it and started going home every weekend.

The 23-year-old now tries to live the best of both worlds. Dressed in jeans and a preppy, button-down shirt and oxford shoes, he attends school, works and does research in Logan. At the end of the day, he drives over an hour to his farm in Idaho, changes clothes and works on his farm.

"It's been hard this last year juggling everything. It's been hectic, but it keeps me out of trouble," he said with a chuckle.

It was his office work in Logan that inspired Mussler to help. He works part-time for the AgrAbility Project of Utah, a grant program funded through the United States Department of Agriculture designed to assist agriculture workers with disabilities. When agriculturalists struggle to independently maintain their way of life, the AgrAbility Project surveys their operation and assesses what could be done to help them overcome the disability, he said. The project gives technical support, help with equipment and environmental modification, educates and facilitates peer support groups.

Mussler personally visits with the farmers in their homes and on their farms to see what their needs are and determine how AgrAbility might help. He finds most farmers are reluctant to admit when they need help.

"You have to help them and encourage them to identify their own needs," he said. "They are a proud people."

Mussler remembered one farmer in particular who had lost the use of his legs and would drag himself around his farm and up into his tractor with his arms. Even when Mussler tried to suggest at least putting pads on the tractor so the farmer was not hurting himself so much, the help was refused.

"He said, 'I've been doing this for years and I'll do it until I can't,'" Mussler said. "They're embarrassed and don't want to talk about their disabilities. As a whole, they don't want help from anyone."

But if the farmer could educate himself from the privacy of his own home, Mussler hopes many more will utilize the many resources available.

Mussler used the "text version" of what he wanted to do, The Toolbox -- a publication from Breaking New Ground, based at Purdue University -- to compile a list of devices that would be applicable to farmers and ranchers in the Cache Valley area. From that list he chose 12 devices to be showcased on his Web site.

To get data about the usability of these devices, the national AgrAbility staff identified individuals who used these devices for Mussler to contact and survey. He also traveled to Purdue University in West Lafayette, Ind., to personally interview these farmers, obtain video and see where many of the devices were manufactured.

Although Mussler wanted to show video clips to illustrate how the devices worked, he was hesitant because most people accessing this site would live in rural areas and probably would not have fast Internet connections. To compensate, he made the video clips short and kept the resolution low.

Currently video clips are accessible for four of these devices on Mussler's site. One clip, viewable on Windows Media Player plug-in, shows an automated milking system. One can see on the video how the milking inflations automatically detach from the cow's udders when the cow is dry, protecting the farmer from repetitive stress injuries and speeding up the milking process. It also prevents unnecessary stress on the cow from overmilking.

Another clip shows the calf-moving cart. This small cart has high sides and a special opening in the front to secure the calf's head. The cart is raised off the ground a few inches by tires similar to those on a bicycle, to allow the calf to step in on its own, and has handles in the back to push the cart with, much like a wheelbarrow. This device allows a worker to transport the calf on wheels rather than carrying the calf or lifting it onto a tall truck bed to be moved. This device also protects the calf from falling off the truck or being dropped by the farmer.

Mussler hopes to have all the video clips and consumer feedback information on the site by the end of the year.

"I really enjoy what I am doing now," he said. "It is rewarding to see [the farmers] be able to stay in their culture and continue doing what they enjoy doing."

The project has proved to be a learning experience for Mussler. He was not experienced in the technical aspects needed to complete the project, but he tackled it anyway.

He thinks the principles he learned on a farm as a child motivated him. His family's farm kept him "out of trouble," and he learned responsibility when his parents trusted him with $150,000 worth of equipment at age 15.

"That makes you learn responsibility in a hurry, when someone entrusts you with that," he said.

Mussler took the responsibility and initiative to gain the skills necessary to build this Web site. "It seems everything is going to be web based in the future," he said. "Now I am gaining those skills and having an opportunity to use them."

He bought books on DreamWeaver, the program he used to write the code for the site, and consulted with computer programmers in Cache Valley. He also took classes on DreamWeaver from the university's Faculty Assistance Center for Teaching. He downloaded many trial versions of video-editing programs from the Internet, and experimented with them before buying Pinnacle Studio 8.

A $500 grant from the USU Undergraduate Research and Creative Opportunities (URCO) Project enabled Mussler to purchase the software and get reimbursed for the 550 miles he drove to get video footage. The ASTE department provided $3,000 worth of in-kind support in the use of a digital camera, computer and server space.

The AgrAbility Advisory Board counseled Mussler on how to make the Web site accessible for his audience and the information streamlined and applicable. Without their help, Mussler said it would have been "impossible for me to look at that and know what to do."

Options for Independence, an organization created to help communities provide equal access to individuals of all abilities, then reviewed his Web site and gave him feedback on its accessibility. He also tested the site's user-friendliness on his grandfather, because most of the people accessing the site would be older and would not have a lot of computer experience.

He hopes another student will continue adding to the research. The National AgrAbility Web site, http://www.agrabilityproject.org, also provides information on assistive technology devices, but does not show video of these devices. Mussler hopes someday video clips can be emailed to this site.

"There are always new things coming out," Mussler said. "It could be a never-ending project." 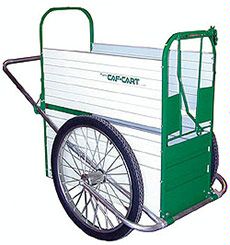