Currently an associate professor of speech-language pathology in the Communicative Disorders and Deaf Education Department of the Emma Eccles Jones College of Education and Human Services, Manuel-Dupont initially joined the faculty at USU in 1985 after teaching for three years as an adjunct instructor.

When Sonia Manuel-Dupont declares, “It’s a joy to come to work, and I really do establish lifelong relationships with students,” that is hardly an exaggeration. After teaching for more than 42 years – the past 38 at Utah State – one of the university’s most diversely talented professors really does mean “lifelong relationships” when it comes to some of her students.

“I’ve got students now – I’m a little reluctant to admit it – but I have students whom I have taught their grandparents, their parents and now them,” Manuel-Dupont acknowledges. “So, I have relationships with families, not just students, and that’s just amazing.”

Currently an associate professor of speech-language pathology in the Communicative Disorders and Deaf Education Department of the Emma Eccles Jones College of Education and Human Services, Manuel-Dupont initially joined the faculty at USU in 1985 after teaching for three years as an adjunct instructor. During her time in Logan, she has taught courses for the English, Communicative Disorders and Deaf Education and Civil and Environmental Engineering departments.

But it is for her efforts beyond the classroom that Manuel-Dupont was recently honored with the 2020 Faculty University Service Award.

“I think it’s probably just the breadth of everything I’ve been involved with,” Manuel-Dupont replied when asked why she felt she received this year’s service award. “… This is my 42nd year of teaching, and so over that time there have just been many, many things that I’ve had a chance to step into.”

Manuel-Dupont recounts the time when the Society of Women Engineers was holding its annual conference in Salt Lake City, but the on-campus group lacked an advisor.

“We had people for some of the engineering programs – oh, I also taught civil engineering here for 20 years – but civil and environmental engineering didn’t have a woman who could take the girls down to Salt Lake City,” Manuel-Dupont notes. “So, I became an advisor for the Society of Women Engineers.”

“I’ve just been lucky to be able to step in when things are needed,” she adds.

During her time at Utah State, Manuel-Dupont has served as a faculty advisor for numerous organizations on campus, such as English Education and the National Student Speech Language and Hearing Association, and she has also played a pivotal role in getting many programs up and running, including the Women and Gender Center, Serving Learning, Latinas First and the Val R. Christensen Center.

Of course, Manuel-Dupont is also quick to point out that “USU was much smaller” when she first came to Logan in 1982, so getting involved wasn’t a challenge.

“We probably knew everybody at the university back then, so it was very easy to get involved in things that were helpful to students and in different faculty issues,” Manuel-Dupont says.

But just before the couple headed south for Tucson, a USU professor contacted Dupont about another potential job offer at the Utah Water Research Laboratory in Logan.

“He really wanted Ryan to come and interview, and Ryan thought, I’ve never been to Utah. I’ll just make the trip and see what it’s like,” Manuel-Dupont recalls. “So, the first night he was here, he calls and says, ‘You can’t believe this! It looks like Switzerland here! It’s the most beautiful place I’ve ever seen!

“And here we were looking at the University of Arizona versus here, and they offered him a great position. So, we just decided to take the leap and come. We knew no one, and we knew nothing about Utah. So, it was just a really interesting experience.”

Ryan Dupont is still a civil and environmental engineering professor at the Water Lab, which means that between them, the Duponts have been teaching at USU for a combined 76 years. According to Manuel-Dupont, retirement for the couple is still around five years away, so she has time to add to an already impressive list of accomplishments.

“We’re thinking maybe five years down the road, but I don’t know how COVID is going to change that,” Manuel-Dupont says. “I think it will just depend on what happens to the university and our country at large and where we’re at. Neither one of is really looking forward to (retirement), but we do have things that we want to do, like travel, and my husband does Engineers Without Borders in Mexico. And so there are things that we don’t have all the time to do that we would still like to be able to accomplish.”

Manuel-Dupont has gone to Mexico several times to help with Engineers Without Borders’ projects, and she’s also heavily involved with the leadership of the Sustained Education Economics and Engineering organization better known as SeeeMe. Founded in 2009 by former USU engineering professor William Greeney, SeeeMe grew out of the USU chapter of Engineers Without Borders with an emphasis on aiding people, particularly girls and young women, in Uganda.

Manuel-Dupont has already made five trips to Uganda with SeeeMe over the past 10 years, and she says those visits have been “life changing.”

“Everybody should have the opportunity to go to a third-world country,” she declares. “You learn much more than you teach. You learn there are ways of solving problems that you had never even thought of before.”

Because of Manuel-Dupont’s passion, many of her students have also gotten involved with SeeeMe and similar nonprofit organizations, and she says that seeing them “catch the fire” is one of her great joys.

“That’s what you want with students; you want to light a fire in them,” she explains. “College isn’t just about books and tests and getting an A in every class. It’s about discovering who you are and what your strengths are. That’s the whole game. You want them to become resilient and try new things.

“I’m a big fan of saying it’s OK to fail. Just try again,” Manuel-Dupont adds. “… Trying and failing is just as important as trying and succeeding, and most of these students do succeed in the end.” 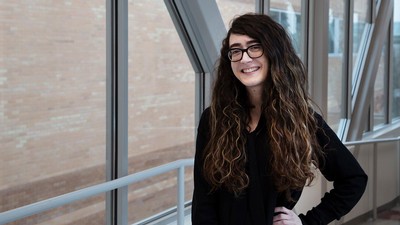 As an advisor, Shoop has opportunities to engage with students one-on-one as she assists them in planning and navigating their years at Utah State University.