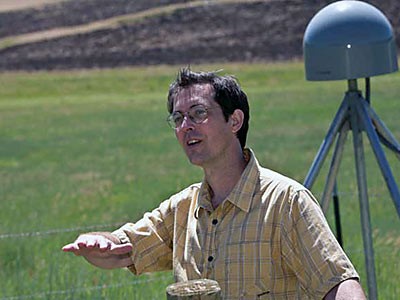 Near an Earthscope GPS receiver in Utah's Wellsville Canyon, USU geophysicist Tony Lowry describes the characteristics of the Intermountain Seismic Belt. He and colleagues discuss an emerging earthquake model in the Aug. 27, issue of 'Nature.’

Much of what we understand about earthquakes is based on plate tectonics. But for residents of Utah’s seismically restless Wasatch Front, a 120-mile-long metropolitan region anchored by Salt Lake City and bounded by the steep Wasatch Mountains and Great Salt Lake, such theory has fundamental limitations.

Because the state’s population center sits deep within the interior of the North American Plate, reasons why the Wasatch Fault is earthquake-prone, while other parts of the state are quieter, are poorly understood.

Plate motions across California’s San Andreas Fault, the Utah capitol’s nearest plate boundary some 760 miles away, don’t give a clear picture of what’s happening across the Beehive state and other areas of the Intermountain Seismic Belt, says Utah State University geophysicist Tony Lowry.

“In continental interiors, we know little about the forces that drive the earthquake cycle,” he says. “We rely mostly on the history of past earthquakes to assess hazards. But, because seismic observations cover only a tiny fraction of the time between the largest earthquakes, we can easily miss important parts of the story.”

Lowry suggests mantle flow stress, occurring deep within the earth, gives new insight into potential hazards that could shake the intraplate belt, which stretches from southwestern Utah up through Idaho and Wyoming to Yellowstone National Park and north through western Montana to Canada. He and colleagues Thorsten Becker of the University of Southern California, Claudio Faccenna of Italy’s Roma Tre University, Brandon Schmandt of The University of New Mexico, Adrian Borsa of the University of San Diego’s Scripps Institution of Oceanography and Chunquan Yu of the Massachusetts Institute of Technology published the foundation of an emerging model in the Aug. 27, 2015, issue of Nature. Their research is supported by the National Science Foundation.

“We’ve explored various aspects of how and why rocks break and flow, but this is the first time we’ve recognized the importance of deep mantle flow,” says Lowry, associate professor in USU’s Department of Geology. “This developing model gives us a new tool for understanding what makes earthquakes tick.”

In the past decade or so, researchers have focused on three possible mechanisms driving the region’s earthquakes. One is variations in gravitational potential energy, another is changes in thickness of the earth’s crust along the Intermountain Belt and the third is changes in strength of the lithosphere; that is, the crust and upper mantle.

Using new seismic and GPS data available from the massive NSF-funded Earthscope array across the western United States, the researchers looked at these observations simultaneously and found some surprises.

“In our earlier work, we tried to understand how deep mantle flow contributed to high elevations in the western United States,” Lowry says. “Thorsten (Becker) pushed us to explore whether or not elevation changes predicted by the same mantle flow models could explain the uplift we were observing with the Earthscope GPS measurements.”

It turns out the model did a poor job of explaining the GPS uplift, but gave a remarkable approximation of where to find earthquake belts because the upward push by mantle flow instead stretches the strong upper layer where earthquakes occur.

“Our findings represent the birth of a new idea and lay the groundwork for a better understanding of earthquakes,” Lowry says. “We now know we need to be looking for the impetus — that nudge that sets an earthquake system in motion — from flow at depths of 60 to 100 miles, much deeper than where we’d been looking.”

Becker, lead author on the paper, says the team’s work won’t be the last word on the origin of intraplate earthquakes.

“Our work shows how imaging advances in seismology can be combined with mantle flow modeling to probe the links between seismicity and mantle convection,” he says. 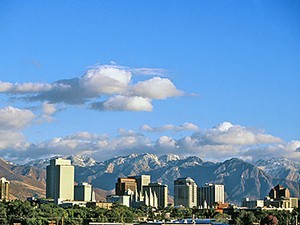 Because Salt Lake City sits deep within the interior of the North American Plate, reasons why the Wasatch Fault is earthquake-prone, while other parts of the state are quieter, are poorly understood says USU geophysicist Tony Lowry. 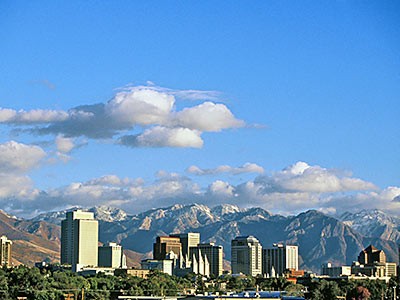