Utah State University professor Edmund “Butch” Brodie, Jr. received the 2007 Henry S. Fitch Award for Excellence in Herpetology at the American Society of Ichthyologists and Herpetologists meeting held in St. Louis July 11-16.
“I was really surprised and pleased by the honor,” said Brodie, who joined USU’s Biology Department in 1994 and is the department’s director of graduate studies. He served as department head from 1994-2003.
Brodie is internationally renowned for his research in the evolutionary response of various amphibians and reptiles to predators. Frequently collaborating with his son, Edmund Brodie III of the University of Virginia, the elder Brodie has published more than 150 peer-reviewed articles in scientific journals. His work has been featured in worldwide media, including Nature, Science, PBS’s Nova series and programs produced by the BBC and Canada’s Discovery Channel.
ASIH member Al Savitzky presented the award to Brodie at the St. Louis gathering.
“The opportunity (to present the award) is both a professional and personal pleasure, as the recipient is someone whose work I have admired for many years and whose research has informed my own in critical ways,” Savitzky said. “Butch has made significant contributions to our understanding of the behavior, ecology and evolution of amphibians and reptiles and offered extensive service to his students, colleagues and the field of herpetology.”
Brodie has mentored numerous undergraduate and graduate student researchers in a variety of significant projects and was named the USU College of Science’s Graduate Mentor of the Year in 2006. In 2001, he received the D. Wynne Thorne Research Award, the highest research honor given by USU.
According to the ASIH Web site, the Fitch Award is given to researchers in recognition of long-term excellence in the study of amphibian and/or reptile biology, based principally on the quality of the awardee’s research, with consideration given to the educational and service impacts of the individual’s career in the field of herpetology. The award includes a cash prize and certificate.
The 2007 ASIH annual meeting was attended by more than 1,000 participants from 26 countries.
Related links:
USU Biology Department
USU College of Science
Contact: Edmund (Butch) Brodie [brodie@biology.usu.edu], 435-797-2489 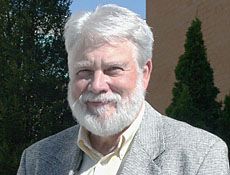