Two Utah State University distance education undergraduate students, under the mentorship of psychology professor Christopher Johnson, will present their research at the Society of Behavioral Medicine 30th annual meeting and scientific sessions. The international conference is April 22-25, in Montreal, Quebec, Canada.
The two posters accepted for presentation are by psychology students Kristen McClellan and Rachel Carter. The research conducted was related to the theory of mindfulness and its influence on well-being and health. The students conducted a survey in Ephraim, Utah, to allow the students to isolate a rural adult population.
McClellan’s research focused on rumination, or the practice of “mulling things over.” She hypothesized that rumination would mediate the association between mindfulness and two variables — life satisfaction and depression.
McClellan graduated from USU’s Logan campus in 2003 with a bachelor’s degree in psychology. She is currently working to complete prerequisites for the master’s degree program in school counseling at Utah State.
“It has been phenomenal to be part of an actual hands-on research project instead of just reading about it,” she said. “I now have a better understanding and appreciation for research and the need for it in our society.”
Carter’s research sought to examine the role of self-compassion as a potential mechanism through which mindfulness may influence health hardiness. The results of the research supported her hypothesis and suggest that additional studies in this area may be warranted.
Carter is a senior majoring in psychology with a minor in family and human development. She attends class at USU’s Brigham City Regional Campus. After graduating, she plans to pursue a master’s degree in social work.
“It has been a privilege to work with Dr. Johnson and gain first-hand research experience,” Carter said. “It really makes a difference to be able to live the process instead of just studying it.”
Johnson is an assistant professor of psychology based at Snow College. Johnson comes to USU from an appointment in Ohio University’s College of Osteopathic Medicine. Johnson was honored as Regional Campuses and Distance Education Research Mentor of the Year for 2008-2009.
The Society of Behavioral Medicine was founded in 1978 as a multidisciplinary, nonprofit organization to advance the science and practice of behavioral medicine. The SBM annual meeting and scientific sessions represents the largest annual scientific conference devoted exclusively to behavioral medicine.
Writer: Kristen Weller, (435) 340-1702, kristen.weller@usu.edu
Contact: Christopher Johnson, (435) 633-3211, christopher.johnson@usu.edu 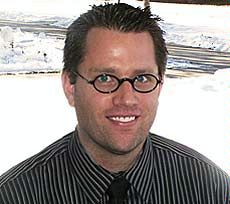 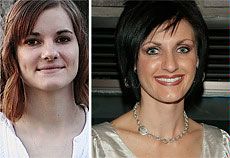 The two posters accepted for presentation are by psychology students Rachel Carter (left) and Kristen McClellan (right). Their research was related to the theory of mindfulness and its influence on well-being and health.