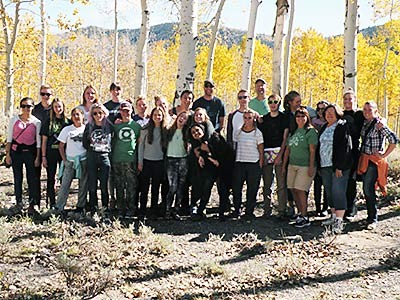 “I was blown away by the motivation of these kids and I’m excited their efforts will be showcased in national media,” says Rogers, adjunct faculty member in USU’s Department of Wildland Resources and the USU Ecology Center, and director of the Western Aspen Alliance. “This is an exciting example of ‘citizen science,’ where teens participate in a complex natural resources issue and gather critical data for scientific research.”

The broadcast coincides with publication of Roger’s article, “Saving Pando: Humans are Taking Measured Steps to Rejuvenate an Ailing Giant,” in the March, 2016, issue of Natural History magazine.

Following a referral from California-based conservation group Pando Populus, Utah State Office of Education official Christelle Estrada approached Rogers with the idea of teaming with the Ogden students on the real-world project.

“Pando made an ideal outdoor laboratory,” Rogers says. “While we focused on the science, Christelle arranged to videotape our endeavors and contacted SciTech Now with the story idea.”

With guidance from Rogers and Ogden High science teacher Ryan Edel, the teens divided into small groups, which designed their own experiments for the two-day Pando outing in Oct. 2015.

“The students asked probing questions about ecology and research methods,” Rogers says. “I was impressed with their preparation and intensity.”

At the research site, the teams determined transects — areas of study interest — and installed plots, where they counted young trees and collected assessments of the condition of older trees. Rogers taught them to look for animal scat, to determine which herbivores were browsing on young aspen stems.

“These students did so well; they were meticulous about recording data and came to me immediately when procedures were unclear,” he says. “Clearly, these students understood the importance of good quality data in the greater scientific process.”

Such attention to detail is important to citizen science efforts to collect usable data, Rogers says.

“I applaud programs like these that introduce people to science by involving them in deciding the fate of nature,” he says. “Getting out in the field and tackling a real-world problem helps people understand the complexity and ‘messiness’ of natural resources issues and allows them to play an important role in finding solutions.” 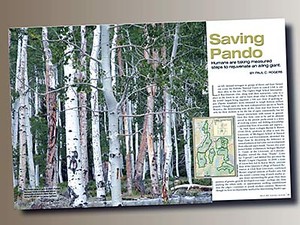 The nationwide broadcast of the team's research on public television coincides with publication of USU ecologist Paul Roger’s article about Pando in the March, 2016, issue of 'Natural History’ magazine. 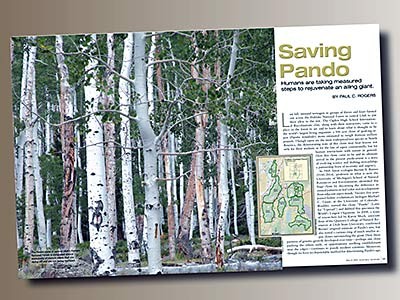