Utah State University undergraduate Cody Tramp was so eager to start his summer internship he arrived on the East Coast almost a month early to complete his security clearance and get a jump on his research. Selected for the 2009 Harvard Stem Cell Institute Internship Program, Tramp will spend the next 12 weeks working in the lab of researcher Niels Geijsen at the Massachusetts General Hospital Center for Regenerative Medicine.
“I haven't started in the lab yet, but I've been in contact with my mentor and have been reading up on his research and lab techniques,” says Tramp, who was named a 2009 Goldwater Scholar. “I wanted to get as much out of this program as possible, so I arranged with Dr. Geijsen to start early.”
Selected from a pool of more than 300 applicants, Tramp is one of about 30 students participating in the competitive undergraduate research program. He received word of his selection back in April from USU alum William “Willy” Lensch, a faculty member in pediatrics at Harvard Medical School.
During his internship, Tramp will participate in weekly seminar series led by Lensch that’s designed to acquaint the interns with specific scientific questions and advances in the stem cell field.
In Geijsen’s lab, Tramp will study the biology of pluripotent stem cells — self-replicating cells derived from mammalian embryos or fetal tissue. He’ll investigate the molecular mechanisms that control cell development and reprogramming.
Tramp, who just completed his junior year as a molecular biology and biochemistry major, says he hopes to pursue further research in stem cell biology following his graduation from USU. His goals include earning a doctorate and pursuing research to investigate genetic and molecular cues triggering stem cell differentiation with the ultimate aim of creating organs or tissue for transplant recipients.
A 2006 graduate of Wyoming’s Lander Valley High School, Tramp received a Goldwater honorable mention in 2008. The same year, he was named a Utah Governor’s Scholar and a Koch Scholar. He is the recipient of a USU Presidential Scholarship, a College of Science Research Mini-Grant and a USU Undergraduate Research and Creative Opportunities Grant.
An Undergraduate Research Fellow, Tramp has pursued a number of research projects at USU, including investigation of a lactic acid bacterium commonly used in the production of fermented dairy products.
Related link:
USU College of Science
Contact: Cody Tramp, c.a.tramp@aggiemail.usu.edu
Writer: Mary-Ann Muffoletto, (435) 797-3517, maryann.muffoletto@usu.edu 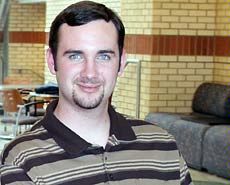