Can you guess the world largest living organism? The blue whale? A Giant Sequoia? A fungus in northern Michigan or the Great Barrier Reef? Guess again.
The answer is likely Pando, a clonal aspen colony living right here in Utah.
Utah State University geneticist Karen Mock recently conducted testing of the forest-size collection of aspen trees, which covers 106 acres in south central Utah’s Fishlake National Forest. Her results confirm the clone’s genetic identity as one enormous plant.
Yes, the Great Barrier Reef is much larger, but it’s created from a great number of diverse reef-producing coral species. Pando, which means “I spread” in Latin, consists of more than 47,000 genetically identical aboveground stems or “ramets” originating from a single underground parent clone. (Homeowners who’ve battled stray aspen suckers in their lawns will have no trouble envisioning this.)
Despite its tremendous size and longevity (scientists suspect the parent clone’s age spans thousands of years), the clone may be threatened by problems impacting many aspen forests of the American West. It’s having difficulty reproducing.
Paul Rogers, adjunct faculty member in USU’s College of Natural Resources and director of the Western Aspen Alliance, recently visited Pando as part of the U.S. Forest Service-chartered Utah Forest Restoration Working Group.
“We were alarmed by what we observed,” he says. “We saw die-off of older trees, which is part of the plant’s natural life cycle. What we didn’t see were many mid-level aspen or much regeneration of stems. There’s very little understory and this could impact the clone’s long-term survival.”
Pando is under intense and ongoing browsing pressure, he says, primarily from deer and elk and possibly from livestock. While it’s too soon to jump to conclusions about the causes, the colony’s condition points to an ecosystem out of balance.
“Elk numbers and, in some places deer numbers, are higher than they’ve ever been in Utah,” Rogers says. “Wildlife managers have taken measures to boost populations to accommodate hunters. At the same time, predators are nearly non-existent.”
Discussion of the problem, he says, quickly leads to economic, political and social issues beyond traditional natural resource sciences.
“There are many different interests involved and management decisions affect those interests in different ways,” Rogers says.
Short-term solutions to the problem include fencing to protect young stems from hungry browsers, though Rogers acknowledges that enclosing the entire organism is unrealistic.
“Pando’s size makes fencing the entire colony difficult, costly and, with its visibility from the Fishlake access road and its popularity as a recreational destination, there’s a likelihood of public outcry,” he says. “On the other hand, none of us want to see the world-famous Pando clone deteriorate significantly.”
Challenges like the management of Pando and its animal neighbors are among the topics to be discussed at the upcoming Restoring the West Conference Oct. 26-27 at USU. Theme for this year’s annual gathering is “Managing Plant and Animal Conflicts.”
“As scientists and wildland managers, we have a long history of dealing with problems separately,” Rogers says. “Bringing people from varied disciplines and management areas together can foster conversations that tackle broader issues of sustainability.”
Descriptions of Pando in this article originally appeared in Utah Public Radio’s Wild About Utah program, “Pando – The World’s Largest Organism,” by Holly Strand.
Related links:
Contact: Paul Rogers, 435-797-0194, p.rogers@aggiemail.usu.edu
Contact: Karen Mock, 435-797-7870, karen.mock@usu.edu
Writer: Mary-Ann Muffoletto, 435-797-3517, maryann.muffoletto@usu.edu 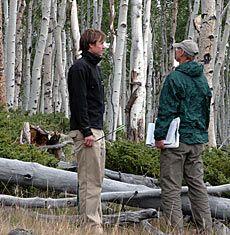 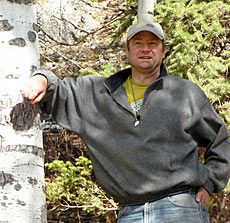