Utah State University’s Society for Physics Students Chapter was recently named a “2006 Chapter of Excellence” by the Society for Physics Students, a national organization affiliated with the American Institute of Physics.
USU’s group was the only chapter from Utah selected for the award and the only chapter honored from the society’s regional Zone 15, which includes Utah, Montana and Mountain Time Zone Idaho.
“We’re very proud of our student chapter and the hard work they’ve contributed to provide interesting programs that benefit people both on and off campus,” says Jan Sojka, professor and head of USU’s Physics Department.
Chapters of excellence are selected based on the chapter’s involvement in local, zone and national SPS gatherings; outreach efforts to K-12 students and the general public, community service and contributions to student recruitment and retention.
Among the Utah State chapter’s successes was last fall’s SPS Zone 15 meeting, hosted by USU and held in conjunction with the American Physical Society’s Four Corners Section Meeting, which drew more than 200 attendees. The gathering, one of the most well attended zone meetings in recent history, featured invited talks by nationally renowned scientists, including USU alum and veteran astronaut Mary Cleave, associate administrator for NASA’s Science Mission Directorate.
Recent chapter activities have also included a trip to view a night static test of a rocket at ATK Launch Systems’ Promontory facility in Box Elder County and a tour of Logan’s Campbell Scientific.
Chapter members are currently conducting physics demonstrations for students at local elementary schools and planning community-wide activities, including a Star Party on the Quad April 13th. Held jointly with the USU Astronomy Club, the Star Party will be held
from 8-10 p.m. on the USU quad and is free and open to all.
“We’ll start the gathering with a talk about astronomy and have telescopes for people to view the night sky,” says Jodie Tvedtnes, president of USU’s SPS chapter. “We’ll be selling cookies, hot chocolate and cider to raise money for our outreach efforts to local schools.”
Tvedtnes, who earned an associate’s degree from Salt Lake Community College and entered USU after receiving a Presidential Transfer Scholarship, says the chapter’s outreach projects are a way to introduce more people to science. “Physics is intimidating to some people and it shouldn’t be,” she says. “We want to show that science is fun and exciting.”
For more information about the Star Party, contact event organizers at usuastronomyclub@gmail.com. For more information about USU’s SPS chapter, contact Tvedtnes at jodie13@comcast.net or the USU Physics Department at 435-797-2857.
Related Links
USU Physics Department
USU College of Science
Contact: Jodie Tvedtnes [jodie13@comcast.net]
Writer: Mary-Ann Muffoletto [maryann.muffoletto@usu.edu]; 435-797-1429 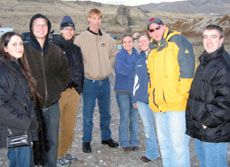 Members of USU's chapter of the Society of Physics Students recently viewed a static rocket test at ATK Launch System’s Promontory, Utah facility. The chapter was recently honored by its national organization. 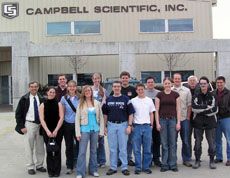