Perhaps ‘never say never’ should be one of Tim Gilbertson’s personal mantras. The Los Angeles native, who joined Utah State University’s Biology Department faculty in 2000, was once “sure I’d be a lifelong Californian.”
After completing his undergraduate studies in biology and psychology at the University of California, San Diego, he also swore he’d never return to academia. “I was worn out from the tough, competitive grind,” Gilbertson told family and friends who joined him Feb. 20 at the President’s Home for the 11th talk in Utah State University’s 2006-07 Inaugural Professor Lecture Series. The series highlights the accomplishments of university faculty who have been promoted to full professor in the past year.
Gilbertson took a job as a research technician at The Scripps Research Institute by day and ran his own graphic arts business by night. What free time was left was devoted to surfing.
Life was good, but after a few years of less-than-challenging assignments, Gilbertson decided it was time to head to graduate school. This time, however, his interest, fueled by his sideline pursuits in graphic design, focused on a new area of study.
Accepted into UC Berkeley’s graduate program in architecture, Gilbertson started making moving plans. His boss at Scripps had very different plans. “Once he caught wind of my intent to leave biology, he convinced me to stay at least one more year – and upped my salary considerably.”
Gilbertson put Berkeley on hold and embarked on what would become his first foray into “actual research.”
Four years in college and several more at Scripps and no research experience? Not really, says Gilbertson.
“At that time, undergrads at UC San Diego basically washed dishes in the lab, and as a technician at Scripps I was helping other investigators,” he says. “These are highly competitive environments.”
During his final year and a half at Scripps, Gilbertson says his supervisor “really took the time and effort to involve me in research and, during that time, I ended up with eight publications.”
Gilbertson was now ready to enter grad school – in neurobiology, not architecture – and, still determined to stay in California, faced two choices: UC Davis and UC Irvine.
“Honest to gosh, the truth is I couldn’t decide,” he says. “It came down to a coin flip – UC Davis.”
Once ensconced in graduate study, Gilbertson made a very easy decision – to marry his newfound ultimate Frisbee partner, Donna. “She had only one condition and that was I had to promise never to live in a big city,” he says.
Another pivotal decision followed, when Gilbertson chose to change his research focus from highly studied visual systems – the eyes – to the relatively untouched study of taste systems. “I thought it would be a good move for a new investigator trying to find his niche,” he says.
The decision propelled Gilbertson and his new bride out of California, first to Colorado, then to Louisiana State University’s renowned Pennington Biomedical Research Center. But in each instance, Gilbertson kept his promise of rural residences, affording the couple homes in the majestic beauty of Estes Park and the moss-laden swamps of St. Amant.
Now happily settled in Utah, Gilbertson continues his quest for answers to a question that dates back to his undergrad years, “How do cells work together to affect changes in behavior?”
In USU’s emergent Center for Advanced Nutrition, in which he works with his former LSU collaborator, USTAR professor David York, Gilbertson is exploring how our taste systems regulate our food choices.
“With David (York) on board, I feel like my career has come full circle,” he says. “The center is really getting its feet under it and we’re starting to meet our objectives.”
Gilbertson was one of USU’s presenters during this past year’s Sunrise Sessions, which showcase university research to government and business leaders along the Wasatch Front. Read more about his research in a recent Utah State Today article, “Obesity Epidemic."
Related Links
Contact: Tim Gilbertson [tag@biology.usu.edu], 435-797-
Writer: Mary-Ann Muffoletto [maryann.muffoletto@usu.edu], 435-797-1429 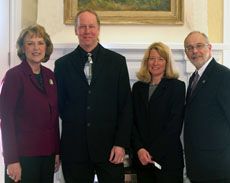 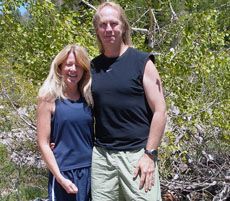