Timothy A. Shahan, assistant professor in the Utah State University Department of Psychology, was awarded the 2006 B.F. Skinner Young Researcher Award, an award that recognizes the work of young scholars who have produced a substantive body of research findings early in their career. Many B.F. Skinner award recipients have gone on to make groundbreaking discoveries or emerged as leaders in their respective fields.
The recognition was awarded to Shahan for his research about psychological disorders associated with drug abuse, ADHD, autism and schizophrenia. Shahan’s research specifically looks at problems involving principles of conditioning and learning.
“One can hardly overstate the prestige this award affords early-career researchers in the field of psychology,” said David Stein, professor and department head of psychology. “Dr. Shahan is clearly a ‘rising star’ in his field. His work will undoubtedly lead to a better understanding of how conditioning and learning contribute to drug abuse. USU is extremely fortunate to count Dr. Shahan among its faculty.”
One project that was funded by a three-year $437,000 grant from the National Institute on Alcohol Abuse and Alcoholism has developed a model examining how features of the environment, i.e., sights and sounds, become associated with taking a drug and how exposure to those features at a later point contributes to chronic drug use and relapse.
Shahan said that drug abusers learn strong positive associations over time between the features of the environment in which they take a drug, associating the pleasurable effects of taking a drug with their surroundings. As a result they tend to pay more attention to those features of the environment called “drug cues.” Although the drug abuser may have expended a great deal of energy to become drug-free, they often continue to pay attention to drug cues and have powerful cravings for the drug as a result.
Shahan modeled this phenomenon with rats using an operant conditioning procedure involving the consumption of alcohol as a reward. Shahan discovered that, like human drug abusers, the rats drink more alcohol if an alcohol cue is present.
Present research is directed at finding behavioral and pharmacological treatments that may reduce attraction to the alcohol cues.
A second project of Shahan’s funded by a three year $462,00 grant from the National Institute of Mental Health uses pigeons in an animal model of divided attention to examine how quantitative theories of decision making might be used to describe how people choose what to pay attention to.
Shahan has been invited to speak at this year’s American Psychological Association convention in New Orleans, where an award ceremony will be held in his honor. 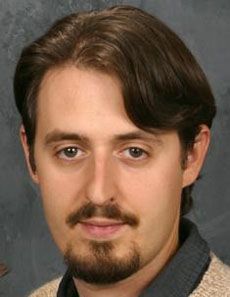