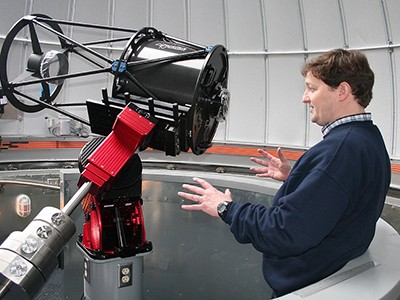 Come August 21, the Sun will put on a spectacular show Utahns, though not directly in the total eclipse path, will still, weather permitting, be able to enjoy.

“Here on the campus of Utah State University in Logan, the Moon will cover 95 percent of the Sun at maximum,” says James Coburn, USU observatory manager in the Department of Physics. “We can expect significant darkening and a noticeable drop in temperature as the Moon glides in front of the Sun.”

For North American eclipse watchers, the Moon will completely block the Sun in only a narrow swath known as the “Path of Totality.” This strip, less than 70 miles wide, extends eastward from northern Oregon, dipping across central Idaho and diving across the nation to South Carolina.

Coburn cautions eclipse viewing, without proper safety equipment, can seriously harm eyesight. Only within the Path of Totality, and only during the brief time the Moon completely blocks the Sun, is it safe to view the eclipse directly without eye protection. This won’t occur in Utah, he says.

“At no time in our state will it be safe to look directly at the Sun during this eclipse, so it’s important to take precautions to avoid permanent eye damage,” Coburn says. “It is absolutely not safe to look at even a sliver of the Sun without certified eclipse glasses.”

Suitable viewing glasses, available online from several manufacturers, he says, must be certified to meet the ISO 12312-2 international standard for safe, direct viewing of the Sun. NASA lists tips on finding certified glasses at eclipse2017.nasa.gov.

“Throughout the Web, suggestions abound for looking at the eclipse with homemade filters, such as developed camera film, but be very wary as most of these approaches are not safe,” Coburn says. “My first choice would be to use commercially made, certified eclipse glasses or to use specially designed solar filters manufactured specifically for safe solar viewing with telescopes and binoculars.”

And if those aren’t available?

“Then, I recommend the tried and true ‘pinhole projector’ method,” he says. “It’s simple, inexpensive and fun.”

Simply take two sheets of stiff, white paper, punch a tiny hole in one of the papers, stand with your back to the Sun, hold the paper with the hole in the Sun’s path, directly above the other paper, and observe the Moon’s movement.

“You can also observe the eclipse by standing near a tree and watching images of the Sun cast on the ground as sunlight filters through gaps in the tree’s leaves,” Coburn says.

In addition to the NASA site, websites offering information about the eclipse, and what to expect by region, include veteran eclipse chaser Dan McGlaun’s eclipse2017.org, space.com and the American Astronomical Society’s aas.org site.

While solar eclipses aren’t rare occurrences, it is somewhat unusual for a total eclipse to be visible from a specific point on the Earth’s surface, Coburn says.

When is the next total solar eclipse visible from Logan? June 24, 2169.

“This is a remarkable opportunity to observe this amazing sky-gazing event,” he says. “As long as we all do it safely.” 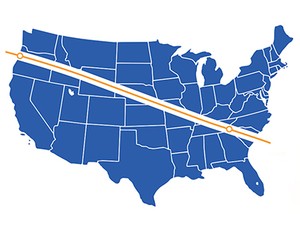 During the August 21 solar eclipse, the Moon will completely block the Sun in a narrow swath, about 70 miles wide, known as the 'Path of Totality.' Courtesy Pisgah Astronomical Research Institute, PARI. 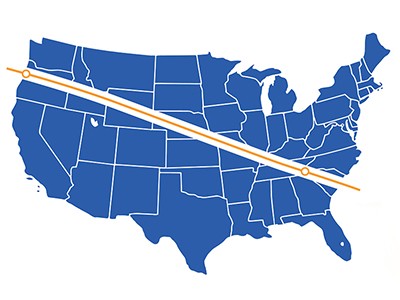