Utah State University ecologist John Stark, USU alum Zoe Cardon ‘88 and their students are another step closer to understanding a natural phenomenon that enables desert plants to access water and nutrients they desperately need — even in the driest circumstances.

“We’ve long known plants reach deep below surface soil to take water up into their shoots and leaves, says Stark, professor in USU’s Department of Biology and the USU Ecology Center. “What we’re discovering is, through a process called hydraulic lift, plants also leak water into the bone-dry surface soil to release nutrients and stir microbial activity critical to the plants’ survival.”

Stark and Cardon, senior scientist with the Ecosystems Center of the Marine Biological Laboratory at Woods Hole, Mass., along with Patrick Herron of the University of Connecticut and USU alum Jed Rasmussen ’08, now a doctoral candidate in microbiology at the University of Iowa’s Carver College of Medicine, published findings from their hydraulic lift experiment with sagebrush, the first investigation of its kind, in the Nov. 4, 2013, online Early Edition of Proceedings of the National Academy of Sciences. The team’s research was supported by the National Science Foundation and the U.S. Department of Energy.

USU ecologist Martyn Caldwell, emeritus professor in USU’s Department of Wildland Resources, pioneered studies of hydraulic lift in the 1980s and since then, Stark says, scientists have pondered its consequences for plant survival.

“Our field investigation, which we carried out in a remote area of mature sageland near Utah’s Bear Lake in 2006 and 2007, was a way of trying to learn more about this process,” he says.

With a team of nearly a dozen student  and volunteer field technicians, the team hauled a water tank, along with solar panels, equipment and a half mile of irrigation tubing, to set up test plots. The scientists developed a new, gas-based labeling technique to trace the flow of nitrogen through the soil and to the plants.

“Existing techniques used liquid, which would have interfered with our experiment,” Stark says.

Through the two hot summers, the team monitored the sagebrush and discovered hydraulic lift stimulated microbial activity and more than doubled the plants’ uptake of nitrogen from the surrounding surface soil.

“These microbes aren’t connected to the plants’ root system, so it was very cool to see this process take place,” Stark says. “Such activity is particularly important in late August, when sagebrush needs a lot of nitrogen to flower and produce seed.”

Greater understanding of hydraulic lift could aid scientists and growers in finding ways to protect crops from the effects of prolonged drought.

“We can learn a lot from native perennial plants that could be applied to agriculture,” Stark says. “This is increasingly important as climate change affects precipitation patterns and drought becomes more common.”

“Microbes recycle the nutrient building blocks plants need to grow,” says the Cache Valley native and Logan High graduate. “Given how many billions of humans there are now on the planet, and how many more there will soon be, understanding the natural plant-microbe recycling systems that have evolved over the last 400 million years may well help humanity maintain the food, fuel and wood production systems on which we depend.” 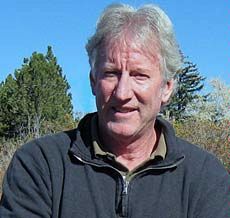 USU professor John Stark (pictured) and USU alum Zoe Cardon '88, a senior scientist with the Marine Biological Laboratory, published findings on a natural phenomenon known as hydraulic lift in the 'Proceedings of the National Academy of Sciences.’ 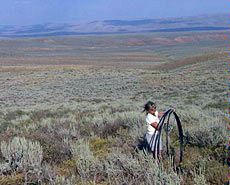