There are plenty of things John A. Widtsoe would not recognize today about the Utah Agricultural Experiment Station's Greenville Farm, a place he helped establish during his tenure as UAES director from 1900-1905.

The wheat at Greenville would appear familiar, though the varieties growing there now reflect 100-plus years of careful genetic selection and improvement. He would understand the need to carefully examine plants being subjected to water and nitrogen stress, but the handheld infrared sensors, Global Positioning System technology and satellite imagery used in those experiments would be a bit mind boggling. And because Widtsoe was by all accounts a gifted scientist and intellectually curious man, he would certainly have questions about the ornamental plants, artichokes, asparagus and turfgrass growing on spots where he once studied alfalfa.

But one thing hasn't changed at Greenville since Widtsoe outlined the farm's mission. The research done there is still all about irrigated agriculture and making the best use of the state's limited water resources.

"The fact that the ancient and, to arid countries, indispensable art of irrigation lacks a scientific basis, is the justification of the decision taken two years ago by the officers of the Utah Experiment Station, to make irrigation the central subject of their investigations," Widtsoe wrote in 1903. "It seemed also eminently proper that Utah, the pioneer irrigation state, should lead out in such work."

The farm's original six acres in North Logan, a spot formerly known as Greenville, were purchased in 1901 and results from the some of the first experiments were published the following year. At various times since then, adjacent plots were purchased so that today the Greenville Farm includes 31 acres at the original site, plus 34 acres of cereals plots across the road and 10 nearby acres used for weed control experiments.

Since the time the first irrigation experiments were done at Greenville, records have been carefully kept of soil and air temperatures, precipitation, the location and kind of plants grown, irrigation regimes, chemicals used, making it one of the best characterized research sites anywhere. Historic records of the farm are critical to scientists today who need as much information as possible about a site in order to understand the results of their experiments amid all the difficult-to-control variables that accompany field research.

Currently, Greenville is home to rows of poplar trees being grown in an agroforestry experiment to determine how they can best be used to take excessive nutrients from soil, act as windbreaks and provide lumber and other wood products. There are corn and wheat fertility studies, and experiments aimed at understanding nitrogen cycling in crops treated with dairy manure. Tall, tangles of wispy ferns mark the location of asparagus variety trials that provide important information to growers working with this relatively small but highly profitable vegetable. Turf grass variety trials make one section of the farm look like a checkerboard putting green without the cups and flags, while other areas are covered with ornamental plants and trees, a reflection of the state's growing urban population and shrinking water supply.

While the technology in use has progressed from wooden weirs placed in canals to infrared instruments that detect plant stress, scientists remain committed to learning more about irrigated agriculture in Utah and building on the tradition of 100 years of research at the Greenville Farm. 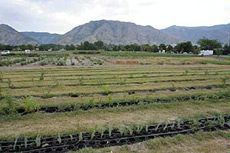 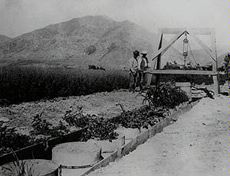 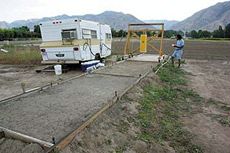