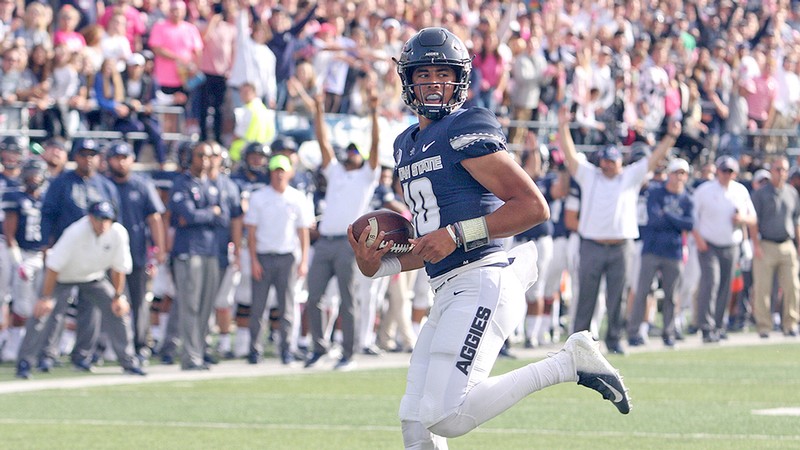 Utah State quarterback Jordan Love runs in for a touchdown during the Aggies' 60-13 victory over New Mexico on Sept. 8 at Maverik Stadium. 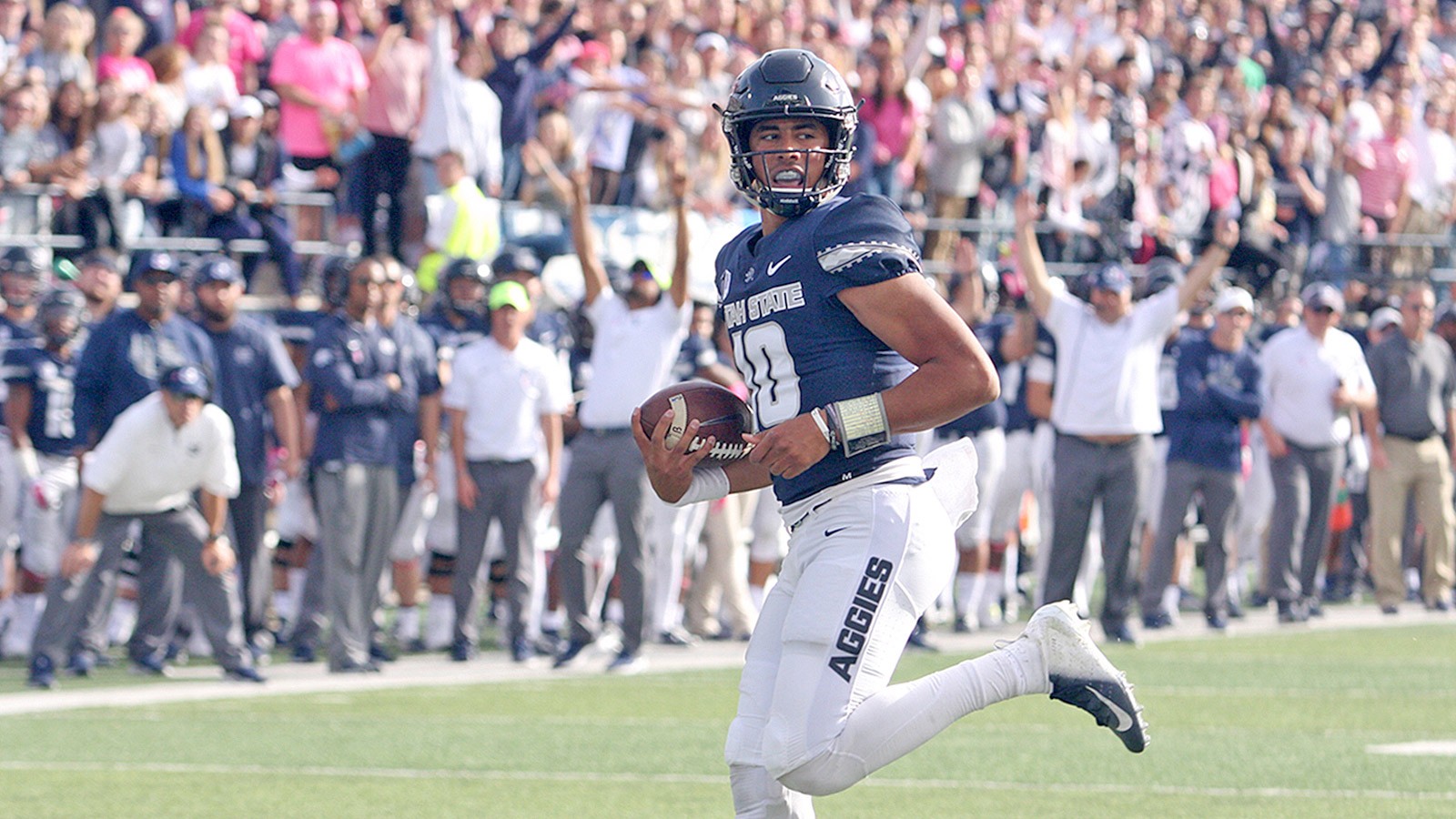 Quin Ficklin never failed to take his job as an offensive lineman seriously, but he also said he’ll never forget the moment his position coach, Steve Farmer, made it abundantly clear that he and the rest of the O-line needed to safeguard Utah State quarterback Jordan Love at all costs.

“We were watching film one day with Coach Farmer when he stopped the video after a breakdown, looked at all of us and said, ‘You need to figure out how to protect him right now because that’s a special guy right there,’” said Ficklin, an All-Mountain West center for the Utah State football team in 2016 and ’17.

“‘Jordan’s going to be a household name someday, so you need to make sure he stays healthy.’”

Love definitely took a big step towards “household name” status on April 23 when he selected by the Green Bay Packers with the 26th pick of the first round of the NFL Draft.

A starter for the Aggies for the past two-and-a-half seasons, Love is the first Utah State football player to be drafted in the first round of the NFL Draft since Phil Olsen was selected by the Boston Patriots with the No. 4 pick in 1970. Love went 21-11 as a starter for USU from 2017-19, and he owns the school record for total offense in a career with 9,003 yards despite going pro with a year of eligibility still remaining.

“My journey has been pretty crazy,” Love said in an interview with Packers.com after being drafted. “Under-recruited, not a whole lot of offers, and finally getting to college and making the most of it as a first-round pick. It's a pretty crazy journey.”

It’s hard to believe now, but there actually wasn’t a lot of buzz four years ago when former Utah State head football coach Matt Wells announced that he and the Aggies had signed a tall, skinny quarterback out of Bakersfield, California, mostly because USU was the only Football Bowl Subdivision (FBS) program in the country to offer Jordan Love a scholarship.

“He's jumped right in the weight room. Our players love him and I know (then head strength and conditioning) coach (Dave) Scholz loves him, but it's hard to say. How quick they can pick it up mentally at quarterback is always one of the key components to being able to use your God-given talents.”

On April 23, Love’s meteoric mental progression as a college quarterback and those “God-given talents” combined to vault the 6-foot-4, 225-pounder from Southern California into an exalted position among just a handful of Aggies to ever be selected in the first round of the NFL Draft. In addition to Phil Olsen, only defensive tackle Merlin Olsen (No. 3 pick by the Los Angeles Rams in 1962), quarterback Bill Munson (No. 7 by the Rams in 1964) and running back MacArthur Lane (No. 13 by the St. Louis Cardinals in 1968) have been picked in the opening round.

Love was the fourth quarterback taken in this year’s NFL Draft, which was done virtually due to the impact of the coronavirus. The son of Orbin and Anna Love, Jordan lost his father at the age of 14, but he persevered and grew in stature, eventually becoming a star at Liberty High School in Bakersfield before being recruited to USU by Wells and former Aggie offensive coordinator Josh Heupel.

Love, who redshirted during his freshman season in 2016, ended up completing 689 of 1,125 passes for 8,600 yards, 60 touchdowns and 29 interceptions during his collegiate career, which ended last December after a bowl game and his completion of a bachelor’s degree in exercise science.

“Ever since I was a kid, I have always dreamed of playing in the National Football League,” Love declared on Dec. 10, just prior to USU’s appearance in the Tropical Smoothie Café Frisco Bowl. “After spending the past four years at Utah State University, I am blessed and humbled to now have that opportunity to pursue my dream and I want to thank my family, friends, coaches and teammates for helping me get to where I am today. With that being said, I have decided to forgo my senior season and enter the 2020 NFL Draft. I will always be an Aggie.”

“Some of the throws Jordan made in our first game of ’18 at Michigan State were throws that no one else could make,” Ficklin recalled. “He made some impossible throws into tight windows and along the sidelines that just had us thinking, We are going to be really good this year.

“We didn’t quite win that game, but afterwards, we knew we were going to roll everybody. And for the most part, we did, because of the smart player that Jordan is and because (former USU offensive coordinator) David Yost had the right schemes for us.”

Although many NFL scouts were troubled by Love’s much higher interception total in 2019, the Packers actually liked Love so much that in order to move up to the 26th pick to select him, they orchestrated a trade with the Miami Dolphins that resulted in the Dolphins receiving Green Bay’s first-round pick at No. 30, as well as a fourth-round selection.

“As far as his skill set, he's a very natural thrower, can make all the throws, he's a very good athlete and he has the kind of size we look for,” Green Bay general manager Brian Gutekunst said of Love the night of the draft. “I just think there's some rawness to him, but I just think he's got everything in front of him. And we really like the guy.”

Green Bay’s trade and selection of Love came as a bit of shock to NFL experts since the Packers’ already have Aaron Rodgers at quarterback, and the former MVP and Super Bowl champion is still under contract for four more years. But after being drafted, Love expressed gratitude to be able to watch and learn while the 36-year-old Rodgers – who was taken with the 24th overall pick in 2005 – continues to add to his hall of fame resume.

“Being able to be in Green Bay and be behind Aaron Rodgers, that's one of the guys I grew up watching, learned how to do it from him,” Love said. “I would say that this is a really good situation to be in, not being thrown out there. I'm behind one of the great quarterbacks in the league. So just being able to sit behind him and learn, what's better than that?”

Ficklin said he feels the same way, and he compared Love having some time to develop behind Rodgers to Love having a chance to learn under former Aggie quarterback Kent Myers. A starter for the majority of his four years at USU, Myers gave way to Love midway during his senior season in 2017 and the rest is Aggie history.

“No one wants to be benched a sophomore during your senior season, especially when you’ve had the kind of success that Kent had,” Quicklin pointed out. “But Jordan learned a lot from being around a great player like Kent, so I hope that Rodgers stays healthy for a year or two and that Jordan has some time to mature and learn the system before he steps in. Having some time to develop is nice.

“But, I do know that if he had to, Jordan could step in and play tomorrow,” Ficklin added. “The guy can just play football. And he handles pressure well. He’s a pretty cool kid.” 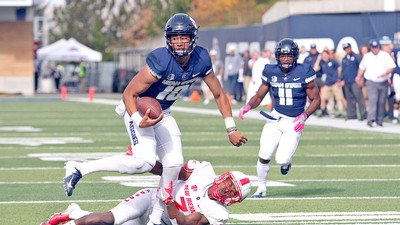 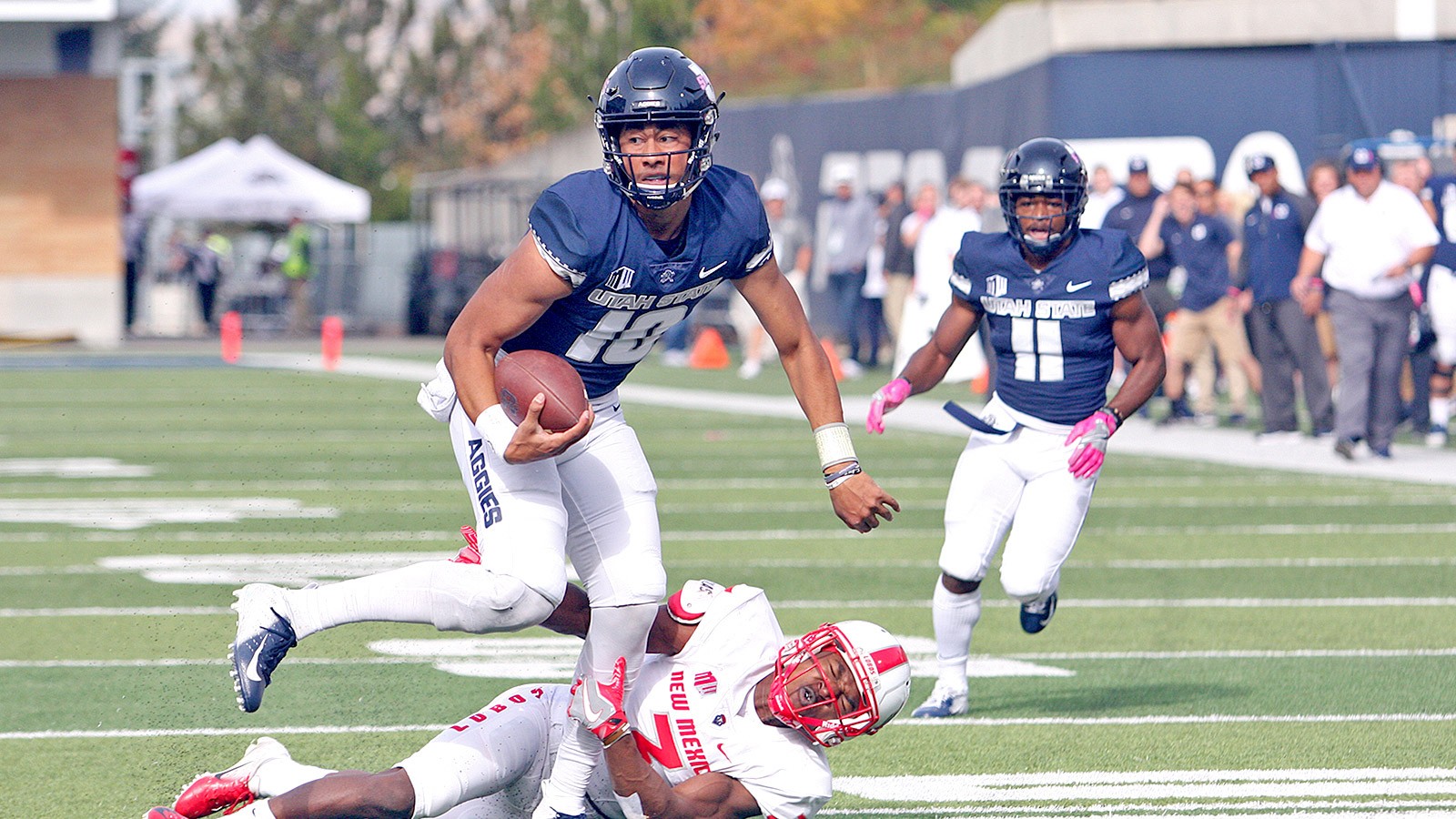 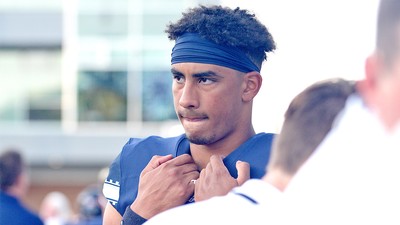 Utah State quarterback Jordan Love watches the defense from the sidelines during the Aggies' 42-32 win over Air Force on Sept. 22 at Maverik Stadium. 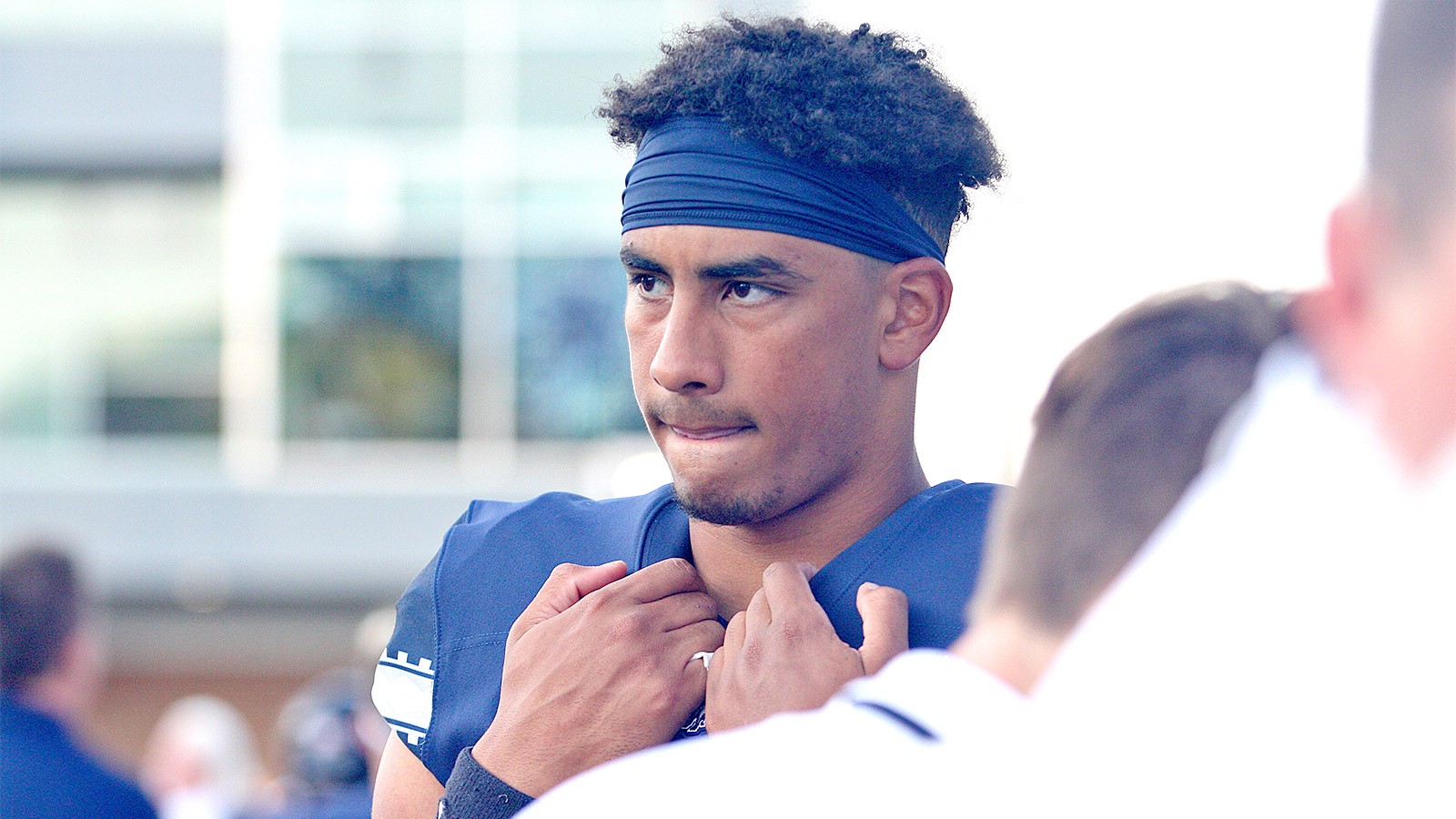 For just the fifth time in school history, Utah State football ended a season nationally ranked as it is listed 24th in the final Associated Press poll that was released Tuesday. 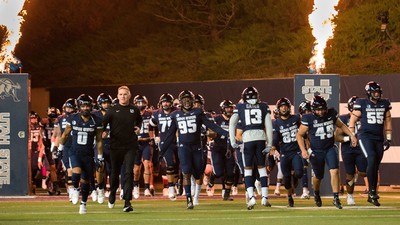