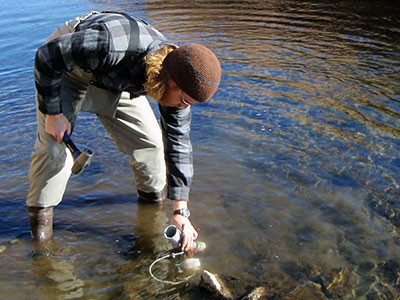 Originating in the Sierra Nevada Mountains of eastern California, the 62-mile-long Walker River winds through the arid sagesteppe of west central Nevada, replenishing Topaz Lake, but nearly stopping short of Walker Lake, of which it once served as a principal inflow.

Remnants of prehistoric Lake Lahontan, Walker River and Walker Lake, both namesakes of 19th century explorer Joseph Reddeford Walker, have long been home to the Paiute tribe. Once teeming with Lahontan cutthroat trout and a magnet for migratory loons, the lake is now too salty to support its traditional fishery and waterfowl. The river, lifeline to the lake, is ailing from more than a century of diversion for agriculture, along with prolonged drought.

Null and her students are studying the river as part of the $8.2 million Walker Basin Restoration Program funded by the National Fish and Wildlife Foundation. Initiated in 2009, program coordinators have developed a voluntary water rights acquisition program with willing sellers and an accompanying water leasing program to reduce upstream water use and increase fresh water inflows to Walker Lake.

“Our focus is on researching water quality effects of environmental water purchases in the river,” she says. “Our efforts will contribute to a comprehensive basin-wide strategy that balances the interests of landowners, water-user organizations, Native American tribes and governmental agencies, while trying the reverse the river basin’s decline.”

“We have 18 water temperature sensors and 10 dissolved oxygen sensors along miles of river collecting hourly data,” Mouzon says. “The sensors are situated above and below confluences and include agricultural sites.”

Collecting data with such frequency results in huge datasets.

“We have three-to-four years of temperature data and more than a year of dissolved oxygen data,” Null says. “Collecting dissolved oxygen data is a bit more challenging, because so many factors can skew the information. That’s why we collect so much, to correct for errors”

She adds Mouzon is “doing a great job” of managing the data with his computer modeling.

“We have good, solid data that will help with management of key aquatic habitat,” Null says. “The river basin supports a variety of aquatic, riparian and terrestrial animal and plant species and also supports the region’s economy.”

Mouzon says field days in the arid region are long, but he welcomes opportunities to leave his computer and wander the river.

“As a native of Florida, the area seemed fairly harsh at first,” he says. “But it’s also beautiful and, being out in the field, you observe a lot of things that you don’t think about while sitting in front of a computer screen. The landscape is always full of surprises.” 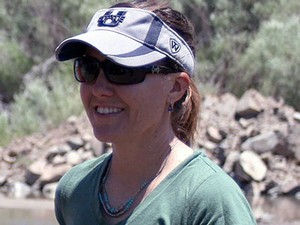 Sarah Null, assistant professor in USU's Department of Watershed Sciences and the USU Ecology Center, is among researchers involved in the Walker Basin Restoration Program. The multi-agency effort is funded by the National Fish and Wildlife Foundation. 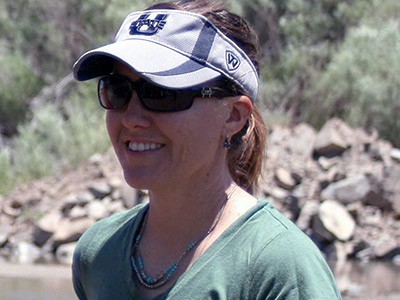