On Monday, Nov. 19, 2012, Schmidt will watch water blast forth from the dam’s river outlet tubes; the start of a four-day period with a peak release of 42,300 cubic feet per second expected Nov. 20. This is the fourth controlled flood conducted using water from Lake Powell, the nation’s second largest reservoir, which borders Utah and Arizona.

Schmidt, who leads the Flagstaff, Ariz.-based USGS Grand Canyon Monitoring and Research Center, was among the team of scientists that designed the first series of controlled floods in 1996. Subsequent high-flow experiments, known as “HFEs,” were carried out in 2004 and 2008 and monitored by Schmidt and his students.

“Glen Canyon Dam, constructed in 1963, traps sediment that used to form and replenish sandbars crucial to native ecosystems,” says Schmidt, who retains an unpaid faculty position in USU’s Department of Watershed Sciences. “The purpose of the controlled floods is to mimic seasonal inundations that occurred prior to the dam and help restore these ecosystems by redistributing sand from the bed of the river to rebuild eddy sandbars.”

Flowing from headwaters in the Rocky Mountains, the 1,500-mile-long Colorado River crosses the Colorado Plateau and winds southwesterly to Mexico’s Sea of Cortez. More than 30 million people in the southwestern United States and another two million Mexican residents rely on the waterway and its tributaries for critical water and power.

“The controlled floods are nowhere near as large as typical spring snowmelt floods of the pre-dam era,” Schmidt says. “But HFEs remain one of the few practical approaches we can use to mitigate the effects of the dam.”

Schmidt and USU alum Paul Grams, MS’97, a GCMRC hydrologist, are among authors of a 2011 USGS report that details findings from the previous high-flow experiments and recommends continuation of the artificial floods.

Each of the earlier HFEs has increased scientists’ understanding of how floods affect the river’s physical environment and biological resources, Schmidt says. While each controlled flood also provides temporary benefit to native fishes, the endemic humpback chub remains endangered and three other native fish have disappeared from the river.

“To restore a river, you have to have water,” he says. “Since Glen Canyon Dam’s construction, the Colorado River will never be the same, but we are committed to developing scientifically based efforts to save what we can of one of the most unique and beautiful places on our planet.”

In an Aug. 30, 2012, ceremony, Anne Castle, DOI Assistant Secretary for Water and Science, presented Schmidt with the department’s STAR (Special Thanks for Achievement) Award. Castle read a citation honoring the USU scientist “for (his) leadership and commitment to science excellence in the development of the Glen Canyon Monitoring and Research Center Biennial Work Plan.”

Schmidt is among the featured speakers in USU Science Unwrapped’s spring 2013 public outreach series, which will focus on water issues. His talk is slated for March 29, 2013, during Quinney College of Natural Resources Week March 25-29 at USU. 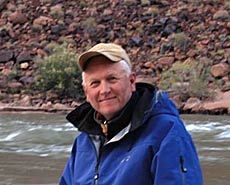 USU professor Jack Schmidt, who was recently honored with the U.S. Department of Interior's STAR award, is coordinating a Nov. 19 controlled flood on the Colorado River. Schmidt heads the USGS Grand Canyon Monitoring and Research Center. 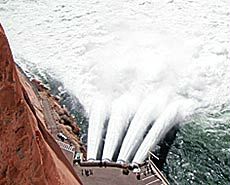 Water from Lake Powell gushes into the Colorado River from Glen Canyon Dam during the U.S. Bureau of Reclamation's 2008 high-flow experiment. USU scientist Jack Schmidt is among USGS scientists who designed the floods. Photo by T. Ross Reeve/USBR.