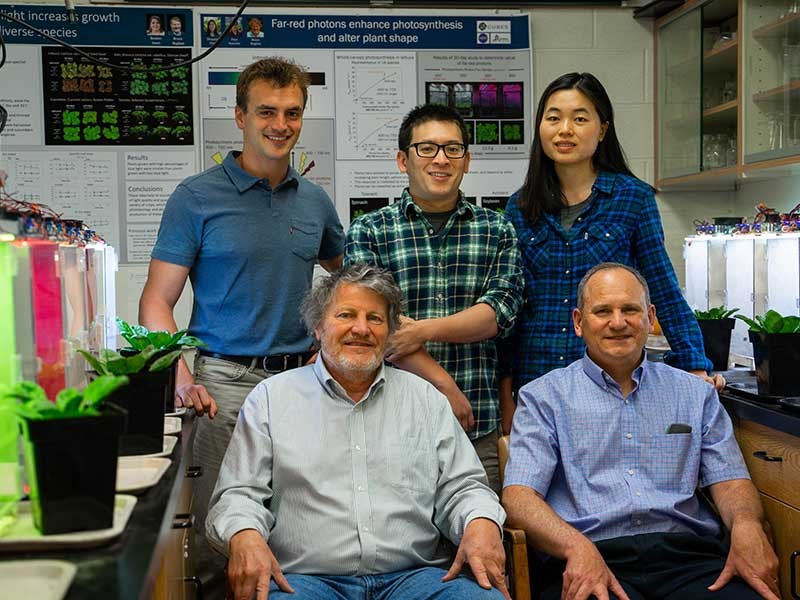 Bruce Bugbee recalls that on July 20, 1969, his mother called him and his friends to come inside because Apollo II astronauts Neil Armstrong and Buzz Aldrin were about to become the first humans to walk on the moon. It was possibly the only thing that could have enticed Bugbee and his friends away from water skiing that day, and those fuzzy images on the television and the wonder of what he saw were engraved in his memory. Lance Seefeldt was an elementary school-aged kid when he watched that first “giant leap for mankind” and is among the many scientists of his generation who trace their enthusiasm for science and discovery back to the rocket-fueled days of the space race.

Now, 50 years later, Bugbee is a professor of plant physiology and Seefeldt a professor of biochemistry at Utah State University and both are involved in NASA-funded research aimed at long-term space exploration on Mars. Their participation in NASA’s Center for the Utilization of Biological Engineering in Space (CUBES)—a $15 million, 5-year program that began in 2017—is just one of many connections USU faculty and alumni have with the space program.

Flight and space exploration can be romanticized as gravity-defying realizations of breaking the “surly bonds of Earth,” but humans developed with Earth’s atmosphere, chemistry, biology, and are governed by familiar laws of physics. Exploring space comes with a daunting array of limitations and risks, even if you just consider the ones we know about. So how does agriculture fit into space exploration when it is so closely tied to soil and natural systems on Earth? The short answer: everyone has to eat.

For years, NASA has analyzed how long space explorers could be sustained by “box lunches” and vitamin supplements before they need a space farm. The space farm is expensive, but provides fresh food, regenerates oxygen, and purifies water—in a miniature copy of the systems on planet Earth. But food production needs to be highly efficient.

“The basic idea that CUBES put forward is ‘How do we get what we need to sustain life on Mars with what is available on Mars,’” Seefeldt said. “That means getting the nitrogen, carbon, the right nutrients, and enough water to grow plants for food and also to make pharmaceuticals.

Nearly everything has to be made on site because the real expense of going to space is in moving things there.”

In addition to the costs, distances between Earth and Mars also mean no quick deliveries of crucial supplies. Bugbee often uses an analogy to illustrate the distances involved in space missions.

“Based on the distance, getting supplies from Earth to the International Space Station is like going from USU’s main campus to downtown Logan,” Bugbee said. “Going to the moon is like a trip from Logan to the Salt Lake airport.  Going to Mars is a trip from Logan to Antarctica.”
Antarctica is a good stand-in for other aspects of a Mars mission. For example, plants have to be grown in an engineered system of chambers because the local “soil” and temperatures can’t support growing plants or people, and supplies can only arrive and depart in specific windows of time due to planetary orbits. Both places are cold and inhospitable, but Antarctica has breathable air and ample water to irrigate plants.

Some researchers on the CUBES team focus on growing food and others are at work on ways explorers could produce pharmaceuticals on-site, perhaps by inserting the genes for acetaminophen or an antibiotic into a bacteria that would then produce a needed medicine. Why not just pack an extra-robust first-aid kit? Mars pioneers will have some medicines with them, but every milligram of weight adds to launch costs and medicines lose potency over time.

“When someone on Mars gets an infection, there will be no time to ship medicine to them,” Seefeldt said. “By the time you got it there the person would be dead.”

The CUBES team is investigating modifying fast-growing plants like lettuce that can provide an anti-inflammatory like acetaminophen, or even inserting a hormone that stimulates bone growth to combat the known problem of humans losing bone density while they live in space.
Barriers to growing food on Mars include the soil, which isn’t soil at all.

“People talk about the ‘soil’ on Mars, but there is no soil,” Bugbee said. “Regolith is the term used to refer to mineral particles that have no life and no organic matter.  Mars is covered with a non-living dust. Soil is alive with microbes and is a dynamic system.”

Seefeldt’s research focuses on nitrogen, a critical element for growing food everywhere. All living things require nitrogen for survival, and it is abundant in our atmosphere, but must be processed before living things can use it. Mars crews will not be constructing a sophisticated and energy-intensive fertilizer production facility to feed the plants.

Mathangi Soundararajan, a Ph.D. student in Seefeldt’s lab, works on using bacteria to capture nitrogen in forms that plants can use on Mars, and identifying the most sustainable and efficient ways to do that.

Seefeldt sees how overcoming food production problems on Mars contributes to solving some problems on Earth. He is an advisor to the Bill and Melinda Gates Foundation in its efforts to improve food production in developing countries, particularly in central African countries.

“We are exploring how we get nitrogen to grow food in the middle of the continent,” Seefeldt said. “It’s not a trivial problem because we don’t have transport systems to use there. We can’t build fertilizer plants near the coast like we have here and transport it because there are not sufficient roads and other infrastructure. So how do we get the nitrogen they need from what is available there? The Gates Foundation is investing millions trying to solve this problem on Earth and NASA is trying to figure it out for Mars. It’s all interconnected for me.”

Farming Mars is sort of the ultimate example of trying to grow crops on marginal land, Seefeldt said, and Bugbee added, “The Sahara Desert would be like the Garden of Eden by comparison.”
What Does Your Garden Grow?

A number of plants have been on the list of possible Mars crops. The CUBES proposal included rice, lettuce, and potatoes, all of which have been previously studied in growth chambers.

“I said rice is very hard to do in growth chambers, so let’s attempt something hard,” Bugbee said. “Potatoes have been well studied and can be genetically transformed to be a more important staple of the diet.”

“We should also add that The Martian did not factor into our selecting potatoes,” Bugbee quipped. “Our proposal was done before the movie was out.”

Seefeldt added that lettuce, which has been grown on the International Space Station, is relatively simple, it grows fast, and can be genetically modified, which is a big factor. Bugbee said the CUBES team will work out what other plants to focus on in collaboration with NASA plant scientists, including some CAAS alumni (see related story) and dieticians. Getting the right mix of important nutrients in a limited, strictly vegan diet, will not be simple.

“We need about 3% lipids (fats) in our diet,” Seefeldt said. “But lipids are hard for plants to make and we won’t be growing avocado trees.”

Bugbee said soybeans are a potentially important staple and protein source because they can be made into other products. Seefeldt added that spirulina, a single-cell organism that is dried and used as a powder, is easy to modify and could be used to produce important lipids such as omega-3 and omega-6 fatty acids.

But transporting living things from one planet to another is also complicated by the fact that biology is constantly changing. So, for example, we could use a bacteria to produce a specific hormone, Seefeldt explained, and then find a year later that it doesn’t work anymore. What genes will do in space over time is one of the unknowns.

The Trip to Mars

One possible mission scenario is that when crews land on Mars they’ll live on food similar to MREs (familiar to members of the military) that were delivered by an unmanned spacecraft years earlier. They will begin constructing a habitat that includes plant growth chambers and every part of a plant that is not eaten will be used to gradually create soil.

“You could pressurize a greenhouse on the surface,” Bugbee said. “But with no atmosphere, basketball-sized meteorites come in at high speed. How does a transparent greenhouse covering withstand that? Humans and plants also need to be shielded from cosmic radiation, so you tunnel underground, inflate a sphere, and use the regolith to provide protection. ”

But this also blocks the sunlight and crop plants require a lot of light. Paul Kusuma, a Ph.D. candidate interested in vertical farming on this planet, is evaluating lighting solutions. Bugbee said CUBES has helped USU attract outstanding graduate students like Kusuma and Soundararajan.

A Mars greenhouse could get light in a few ways, including a large array of solar panels connected to electric lights, but most promising is using curved mirrors and fiber optics to concentrate and transmit light directly to the plants. This method allows scientists to get light directly to leaves and tune the wavelengths to suit different plants. In the lab, Kusuma and Bugbee are learning how adjusting light waves is the difference between increasing leaf area or burning a plant, growing stems too long to be structurally sound or slowing photosynthesis.

“I still can’t believe that I’m doing this,” Kusuma said. “About 3 years ago, I was unsure if I even wanted to go to grad school and here I am working on this interesting project. I really enjoy working on this because it has applications beyond just Mars. It has plenty of applications here on Earth.”

NASA’s Center for the Utilization of Biological Engineering in Space is comprised of researchers at Utah State University, the University of California Davis and Berkeley, Stanford University, and University of Florida, each with a specialized segment of the mission. For example, Mars pioneers will 3D print things like containers, replacement parts, and tools using natural plastics that begin as polymers made from bacteria. They’ll use software tools that let explorers design, draft, refine, and print what they need.

“We’ve known for years that plastics can be made using bacteria, but their properties are poor,” Seefeldt said. “They are brittle and don’t last long. Our partners at Berkeley and Stanford are learning how we can modify those polymers to have better properties, more pliable and durable, and print what they design. It’s quite revolutionary.” 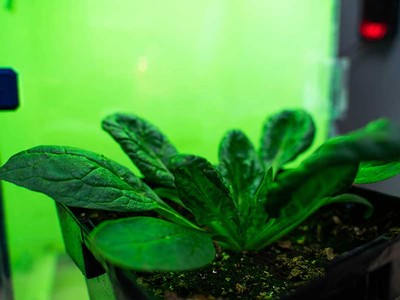 Salad crops, such as spinach, will likely be part of astronauts' diets on long-term space missions. Lighting is one of the critical factors for producing food in growth chambers and is one focus of work in Professor Bruce Bugbee’s lab. USU has a history of research related to growing plants aboard spacecraft and Aggie alumni are among the scientists at NASA working toward missions to the moon and Mars. 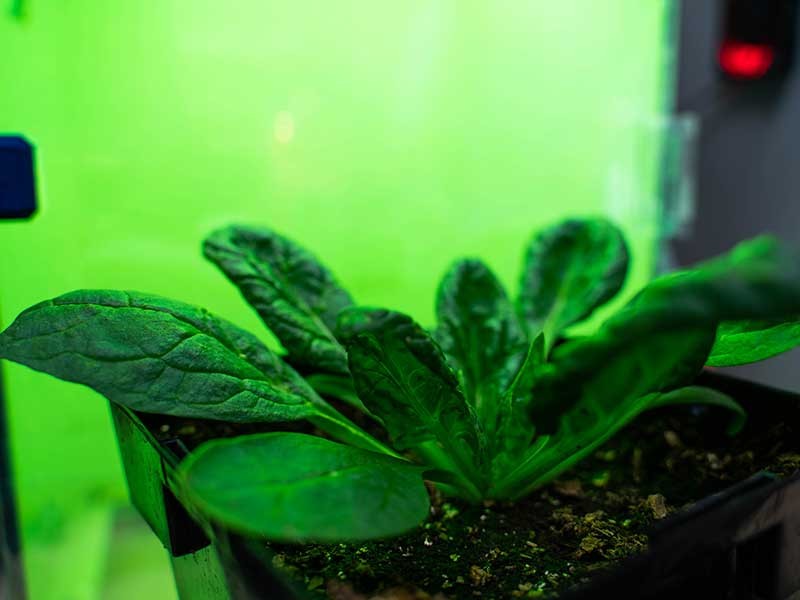