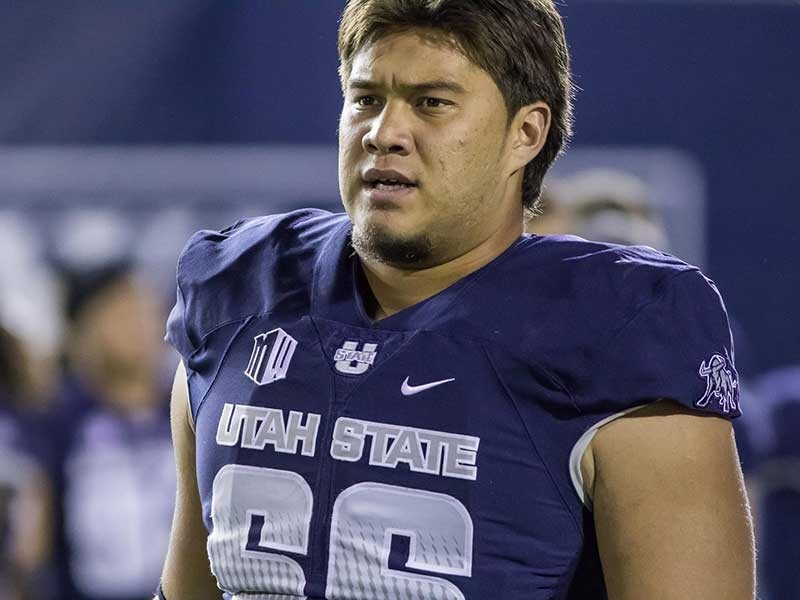 His parents, Benjamin Uluave and Kimberli Redman, both graduated from Utah State, as well as his grandparents on his mom's side. In fact, he lived in Logan while his parents were going to school.

"I started pre-school there, then we moved to Hawaii after they graduated," said Uluave, who was actually born in Idaho Falls, Idaho, but grew up in Laie, Hawaii. "Most people don't know that we are True Aggies through and through. You'd never know it because we come from Hawaii."

When Uluave was offered a scholarship to play football at Utah State, the Kahuku High School standout did not pass up on the opportunity.

"I was going to go anywhere I could, but when the offer came, my mom was like, 'You've got to go there. I went there, your dad went there,'" Uluave said.

The 6-foot-4, 300-pound senior offensive lineman has had his fair share of trials during his time with the Aggies. After all, he has dealt with his fair share of injuries, including two knee surgeries, but continues to persevere.

"With any type of injury, or anything that keeps you from playing, you really wish you weren't in that situation, but there is nothing you can do," Uluave said. "Putting in extra time to rehab and treatment, all the extra stuff they have available for us, really made the difference. As far as attitude-wise, it's like (head) coach (Matt) Wells always says, it's always about attitude and effort, and you can control those two things. I just chose to try to keep a positive attitude, even though I was injured."

One of those injuries forced Uluave to miss the majority of his junior season in 2017 as he appeared in just one game and recorded a knockdown against Idaho State.

"KJ is a former defensive lineman and he had a setback two springs ago with an injury that kind of derailed his junior year, but he has come back with a great attitude," said USU offensive line coach Steve Farmer. "For us to be where we want to be, he needs to be playing, whether it's a couple of series a game or whether it's in some certain packages."

Added Uluave: "I wasn't able to play very much last season, but I tried to keep a positive attitude and just did as much as I could for the team. I made sure that whatever I could do, I did to the best of my ability."

Uluave redshirted in 2014, then played in two games the following season. As a sophomore in 2016, he appeared in all 12 games, making four starts at right guard. He recorded 13 knockdowns on the year, including a season-high six at Wyoming, while he graded out at 83 percent and tallied two knockdowns against BYU.

Uluave married Cindy Lavulavu – the couple grew up in the same town and have known each other since elementary school – in May of 2015. They are the proud parents of two boys, Kage (2) and Saione (1).

Balancing all three facets of life – football, schooling and family life – does not phase Uluave.

Uluave cherishes being a father to his two young sons.

"It means the world to me," he said. "There is just a new-found place in your heart that opens up once you have your own kids, and being able to experience that and them being able to watch me play, which they are probably not going to remember. But, we'll have these memories of their early years and supporting me while still being able to play the game that I love."

Another memory KJ Uluave will hold forever is getting to play with his little brother, Siotame Uluave, this season. Siotame, who is a sophomore offensive lineman for the Aggies, transferred to USU this summer from Snow College in Ephraim, Utah.

KJ Uluave graduated this past May with a degree in social work. He is currently working on a second bachelor's degree in human development and family studies at Utah State. His long-term career goal is working with troubled youth, which he has already started doing at the Cache Valley Youth Center.

"I did an internship there and then they offered me a job, so I'll do that when our season is over," said Uluave, who served a mission for The Church of Jesus Christ of Latter-day Saints in Salt Lake City, Utah, from 2012-14. "The goal, whether it's in a detention center or residential treatment center, is working with kids who have suffered trauma in their youth, like abuse or neglect. I want to work with those kids to help them get their lives on the right track before they end up in the system."