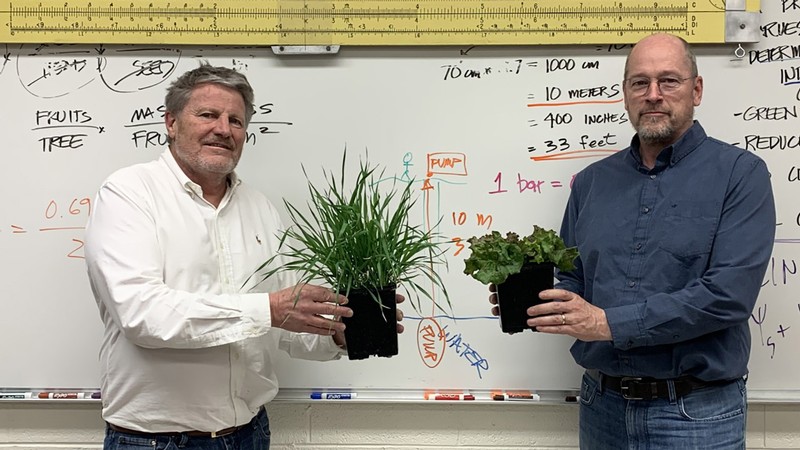 Professors Bruce Bugbee and Scott Jones (left to right) are using their experience with plant-growth chambers aboard spacecraft to improve methods of growing plants to feed space explorers. 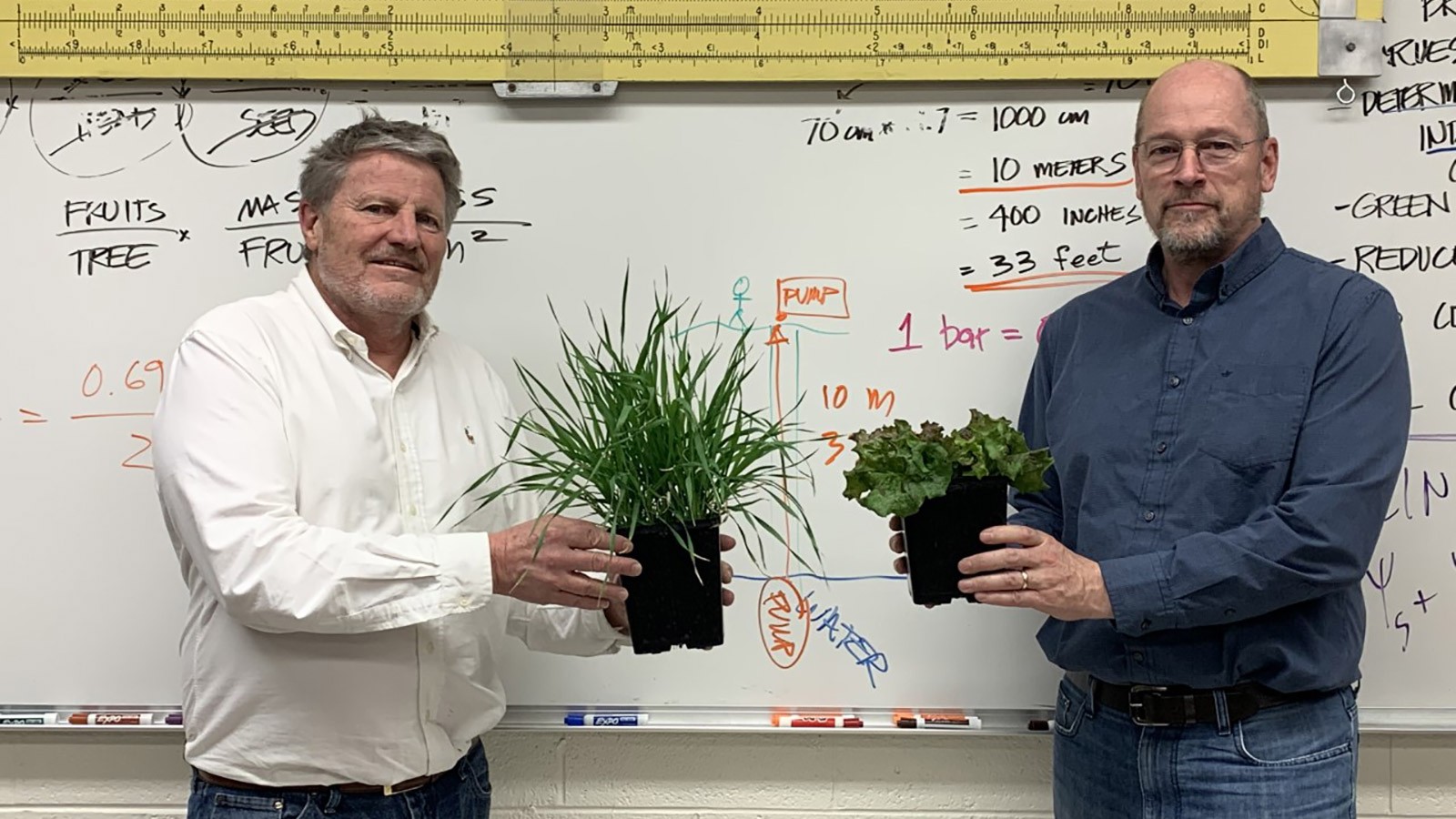 Food has taken on new appearances, new properties, and even new functions in the 21st century, but plants continue to supply the bulk of calories for humans. Preservation techniques have advanced further than ever, but even the best-preserved food degrades over time and loses nutritional value. That is why, according to NASA and other countries’ space agencies, continuing to investigate ways to create efficient plant-growth systems is essential to ongoing space exploration.

NASA recently announced the selection of five research projects to develop and test new plant-growth systems to fly aboard the International Space Station (ISS). Two of the five projects have ties to Utah State University, with Department of Plants, Soils and Climate (PSC) Professors Scott Jones and Bruce Bugbee, and Emeritus Professor Gail Bingham conducting research on the Logan campus, and PSC alumnus Oscar Monje-Mejia leading a project at NASA’s Kennedy Space Center. The five projects collectively are supported by an investment of over $1.1 million over 18 months.

“We want to develop a system that can grow anything. Anything,” Bugbee said. “It's not a system that would grow wheat any different than lettuce or anything else. We're not going to test one species at a time and work through a list.”

Astronauts have already eaten their first “space-grown” veggies in the past five years. However, the range of plants existing systems have produced has been relatively narrow. Bugbee hopes to change all that with the new research.

On Earth, many plants grow with or without human intervention. Specific types of plants are cultivated, but natural systems such as the water and soil cycles renew fertile land, and forces like gravity direct water flow and impact plants’ growth and development. Outside Earth’s relatively thin atmosphere, there are a number of serious plant-growth challenges to overcome. Growing plants in space has been limited to orbiting space stations, which operate in microgravity. In other words, the effect of gravity is negligible because of the motion of the spacecraft orbiting the planet.

Plants are grown in a solution of nutrients and water that permeates a growth medium, referring to the material in which plants may be rooted. The solution of water and nutrients must be carefully controlled so as not to drown, suffocate, or oversaturate the plants’ roots. Bugbee, Jones and Bingham, have been awarded a Phase 1 research grant to improve the root-zone of plants in microgravity. The three scientists have worked for decades with space agencies to develop and improve plant growth systems on both the ISS and Russian Mir Space Station.

“Getting measurements was one of our main goals early on,” Jones said. “There were a lot of failures. They were trying to grow plants and the plants were dying. We learned what kind of sensors could work early on, and also learned from problems that happened in the hardware that was flown in the Russian space station, Mir. We’re building on some of the things we learned about how to sense the water content in the [growth] media.”

“Historically, we have underestimated the challenge of watering plants in space,” Bugbee said. “Along with our international colleagues, we have used several approaches but we did not have the resources to do comprehensive ground-based testing. This led to ISS experiments that were overwatered, and then underwatered on the next flight. We have gradually gotten better at the seemingly simple task of watering plants without gravity, but we know we can do better. This is our chance to develop an elegant system for long-term food production”.

According to Bugbee, underwatering causes a plant to wither quickly in the abnormally bright and warm conditions aboard the spacecraft, but overwatering and any leak in the system after launch can create serious hazards.

“It might leak out, get into the cabin and create all kinds of havoc,” Jones said. “You can imagine water getting into a computer system or a life support system—it would be potentially disastrous.”

In addition to testing the best methods for precisely delivering adequate water, the team at USU will investigate alternative growth media and improving nutrient supply. Fabrics, foams, and research greenhouse soils are being considered as potential candidates for growth media. Jones is excited by the possibility of using 3D-printed materials, including soluble materials already in use in the medical field. The same materials that are used in surgery as frameworks to support regrowing lost tissue may be used as a sort of potting soil for the next generation of space produce.

“Some people who think about growing plants in space or on the moon or Mars might think we're just going to take soil and grow plants in it,” Jones said. “That's not the case. We never even considered using soil until we thought about going to Mars, and one of the reasons is that soils contain a lot of unknowns. It's much easier to start with materials that we know about, that we control or that we design.”

Finally, the USU researchers hope to address the issue of adequate oxygen in the root-zone. While leaves absorb carbon dioxide, the roots need oxygen for respiration. In order to introduce oxygen in a controlled environment like a plant-growth chamber on a space station, you need to continuously “blow bubbles” in the water. Think of it like a carbonated beverage: the longer the soda stays exposed to air, the more carbonation it loses.

On Earth, oxygen is steadily replaced by environmental systems, but Bugbee, Jones and Bingham, are collaborating with a private company, Moleaer, to integrate the company’s nanobubbler technology into the plant-growth systems.

The nanobubblers are used in more than 400 applications worldwide for agriculture, horticulture, wastewater treatment and aquatic systems, but scaling the technology for space flight is a new undertaking.

“Moleaer does this on a big scale for waste treatment plants, and agriculture, but they are developing a tiny device that we can fly on the ISS,” Bugbee said. “This is cutting-edge technology.”

“The opportunity to be part of NASA’s research is a great privilege for our team and our technology,” Russell said. “We’re excited to collaborate with the team at USU to develop methods for delivering water and nutrients to plants in microgravity. This opportunity allows our teams to further explore the capabilities of nanobubbles. We’ve proven our patented technology works to improve plant health and crop yields on Earth, and we’re eager for the challenge of launching our technology into space.”

Across the country, Monje’s research is focused on improving the porous tubes that water plants in addition to enriching the growth medium with nutrients. He helped to develop the latest plant growth system that launched in 2017.

The Advanced Plant Habitat used a substrate made of baked clay particles (like scientific cat box litter) and stainless-steel piping created by heating powdered steel. The process allows water to be released into the substrate at a controlled rate.

Any particulates in the water could clog the tubing and there is some concern about microbes building up in the tubing, according to Jones. Monje’s research is directed at addressing these risks in addition to monitoring and evaluating any proposed systems.

The two research projects will go head to head along with the three other proposals approved by NASA. These systems have the potential to significantly reduce waste and save money for NASA while also teaching researchers more about the requirements for plant growth on the ground and in space. The implications for these discoveries range from improved greenhouse and crop production to combating famine and feeding the Earth’s growing population. 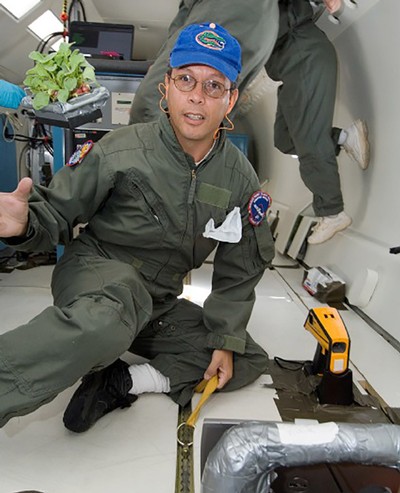 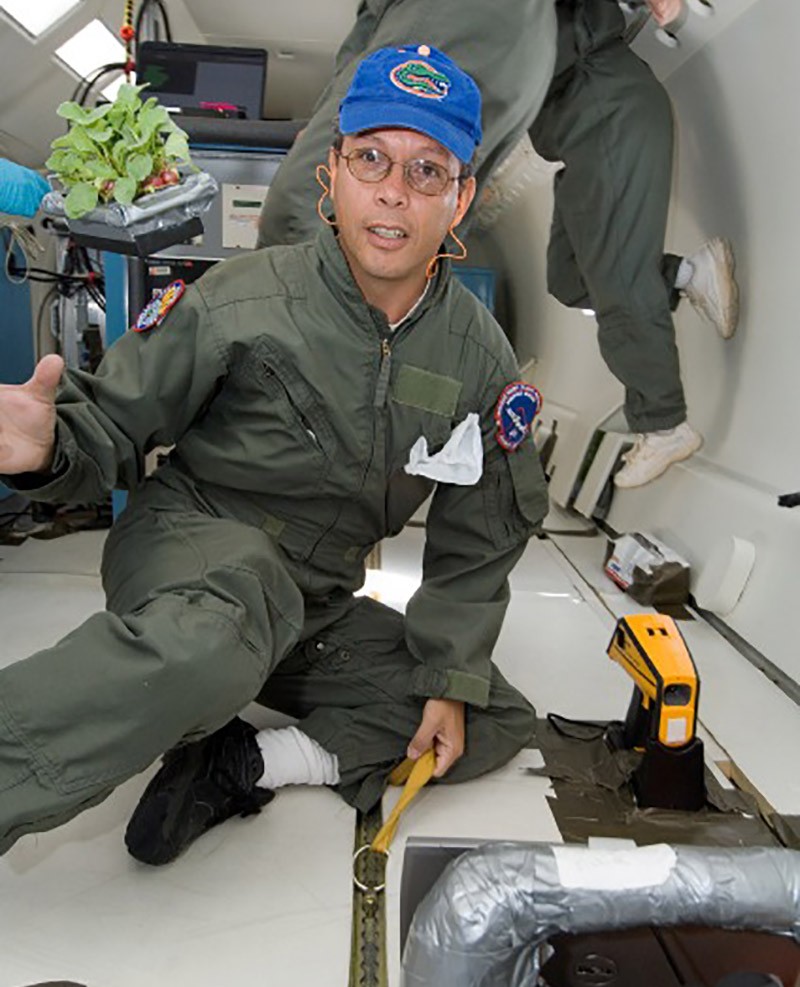 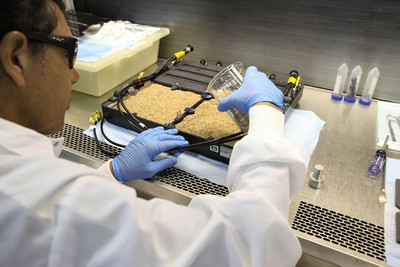 Oscar-Monje-Mejia is shown here working on hardware for experiments in NASA's Advanced Plant Habitat that began operating aboard the International Space Station in 2018. 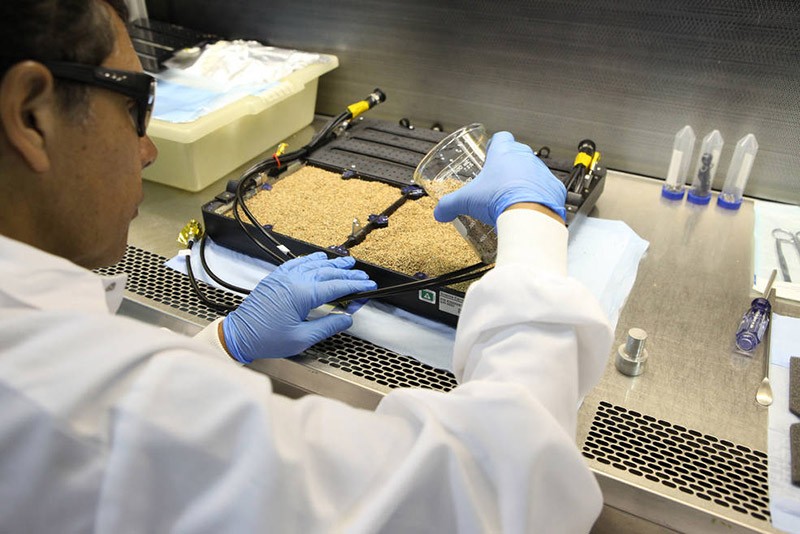