It seems the ancient Fremont people would have taken a real fancy to scones, Jell-O, funeral potatoes and Dutch Ovens.

Granted, Utah’s signature foods were not exactly on Fremont menus 1,000 years ago, but these early state dwellers did chow down on bone, hide and connective tissues, from which gelatin is derived. They also consumed plenty of bread- and potato-related food items found in their maize, tubers and rhizomes, and engaged in some serious containment cooking.

Food sustains and even explains a little bit about the people who consume it.

Yes, people are what they eat and that is why Timothy Riley, archaeologist with Utah State University Eastern Prehistoric Museum, is so interested in determining who the Fremont people were by what they ate. These mysterious people, who were both farmers and nomads, inhabited the region comprising Utah as well as parts of Idaho, Nevada and Colorado between 400-1350 A.D.

Plants and diet have always been a favorite topic for Riley and were the focus of a recent lecture he gave at USU Eastern Prehistoric Museum as part of Utah Archaeology Week. And best of all, he didn’t just talk about what the Fremont people ate; he dished it out in the form of a four-course evening of sampling.

By the end of the evening, the 30 or so people in attendance experienced the Fremont culture as though they had been guests in their pithouses. The similarities between then and now made dining with the Fremont not only bearable to the palate but really quite pleasant.

Of course in order to develop his menu, Riley had to get his hands a little dirty because he could only determine what went in the mouths of the Fremonts by carefully studying what came out of them.

Yes, his menu was based on fossilized human waste, called coprolites.

And Riley couldn’t have been happier digging through the dung knowing it was for the greater good. There is much to be found in discards. What fascinated him was the amount of animal hair, fish, seeds, grass and fiber he found in Fremont waste.

Because such matter is not easily preserved, human coprolites are particularly rare and, shy of stumbling upon Fremont latrines, elusive. In fact, the best examples of Fremont feces finds date back to the 1960s and 70s from which Riley did his research. These samples were dug up by archaeologists at three Fremont sites in Utah, including the Hogup Cave site along the Great Salt Lake.

“Coprolites actually do give you direct evidence that people were not just gathering these plants and using them for baskets and tools, they were also eating them and combining them and so the idea of menus and meals is something you can get at through coprolites.”

And to his biggest surprise, despite the plethora of Fremont granaries throughout the region storing all that maize, what was most abundant in the coprolites were wild seeds.

Of the 30 coprolites he analyzed, 17 reflected no field-grown foods. The remaining samples revealed eight with corn and the other five with corn and other domestic foods. At the sites where corn had been the most heavily ingested, such as the Hogup site, they also found greater nutritional stress. Maybe they figured out, and a little too late, that strictly farming was not good for their health – more nuts and berries were in order.

After 1150, they evidently switched primarily to a hunter-gatherer diet and were the better for it — their muscle mass increased and their nutrient stress decreased, as reflected in the Harris lines in teeth and skeletal robusticity based on muscle attachments, Riley said.

“It looks like people who were eating a lot of maize were actually probably the least healthy,” he said. “We see that a fair amount in hunter-gatherer versus agricultural populations. Hunter-gathers tend to have seasonal nutrition stress but they don’t have long-term nutritional deficiencies the same way agriculturalists tend to.”

After tasting the spring onion salad, the pinion nuts and pumpkin seeds, the palatable merits of mixing it up became especially apparent to Riley’s guests. But it was not just about the food that was prepared but also how it was prepared that was important to the evening. Archaeologists have determined that the Fremont people used cooking slabs, (like pizza stones), hand-held grinding stones, called manos, parching trays, boiling baskets and ceramic vessels.

The food on this particular night was prepared primarily through boiling in ceramic vessels, which made for tender and moist morsels. So not only did Riley prepare and serve what he said he’s 99 percent sure the Fremont people ate, he also cooked it up in the same ceramic fashion that they did. Utah’s fascination with Dutch Ovens appears to run deeper than anyone could have imagined. 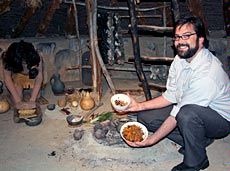 Dinner's at his house! Timothy Riley, archaeolgist with Utah State University Eastern Prehistoric Museum, with a sampling of dishes. 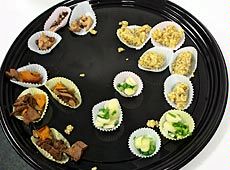 A sample tray of Fremont foods. 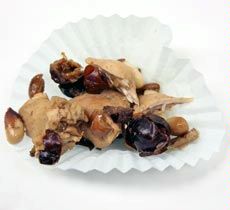 What's on the menu? Dusky grouse with pinion nuts and Juniper berries. 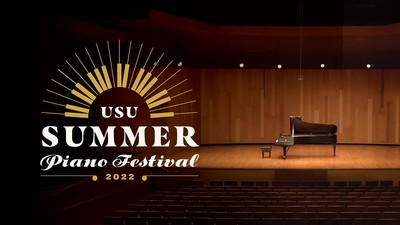 Bibhu Mohapatra '98 is wearing black again. The same zip-up jacket the fashion designer sported during a visit to Logan a week ago.